The gold that we treasure in Biei isn't mineral, it's vegetable!

What are these tall, green crops with fuzzy antenna? 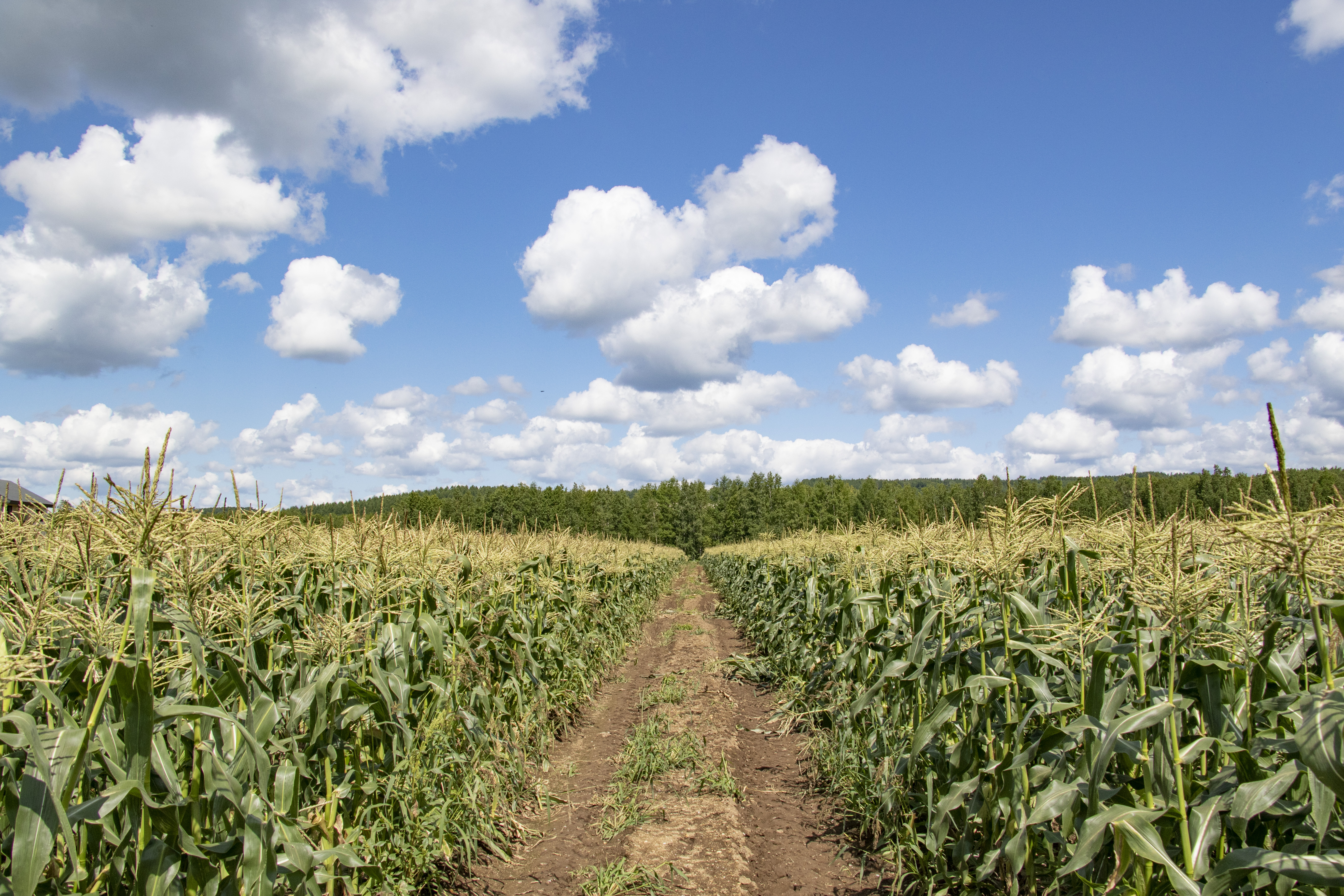 These are sweetcorn plants, another of Biei's main crops!

When did sweetcorn come to Biei?

Sweetcorn has actually been around in Japan for several hundred years, brought to the country by the Portugese from their American territories in the 16th century. For a long time it was used only as food for animals, but in the Meiji era (late 19th century) people began growing it for consumption. Hokkaido was the first region in Japan where corn was grown domestically, beginning in the early 1900s—so we can make a fair estimate that sweetcorn may have been grown in Biei since its foundation over 100 years ago! 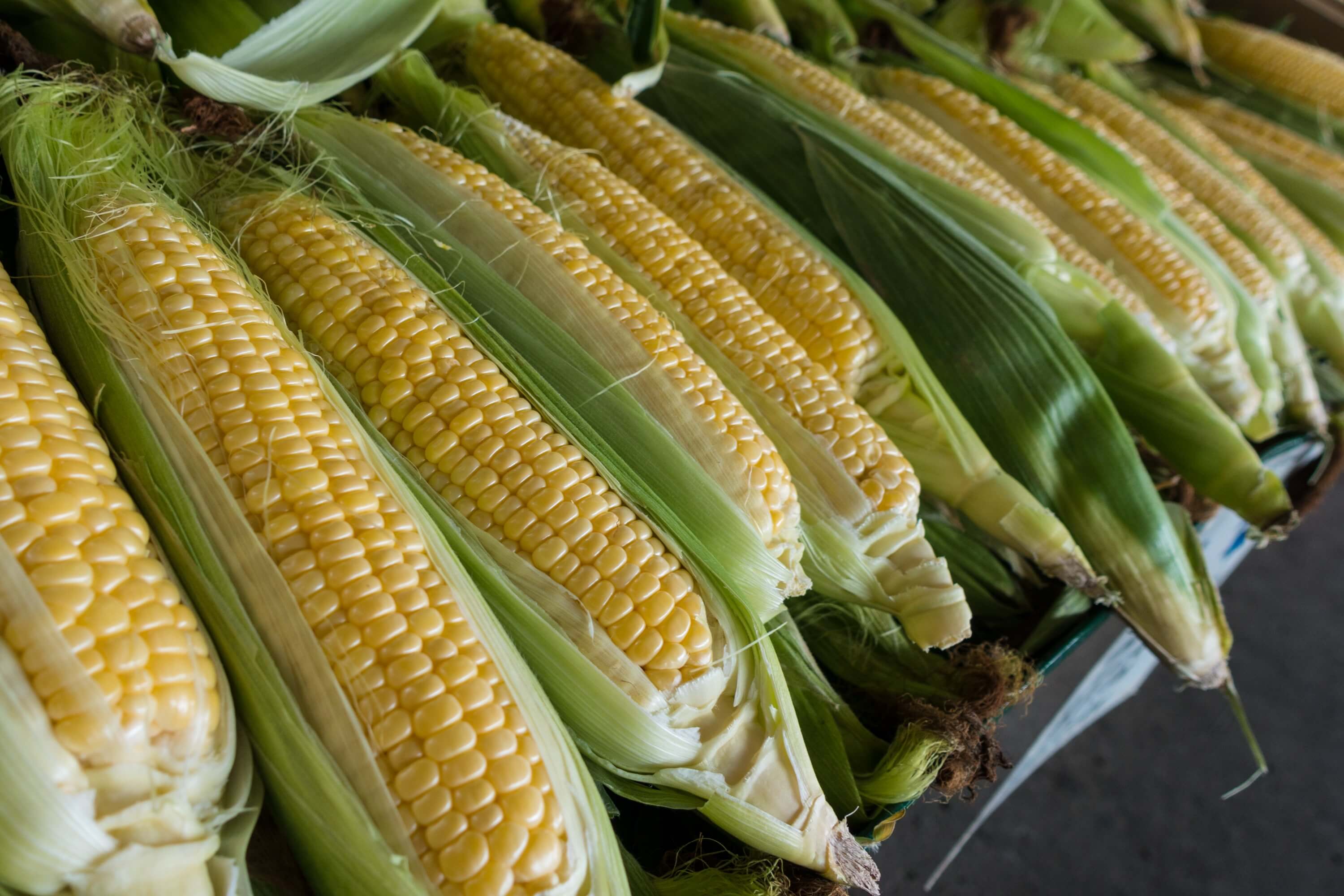 Even today, Hokkaido produces the largest amount of sweetcorn in Japan. Hokkaido's harvested sweetcorn yield was 83,600 tonnes in 2018! This gives you some idea of how widely cultivated sweetcorn is in Hokkaido. Biei was the 5th-largest contributor to that yield at 3,990 tonnes, so as you can see it is a crop that is essential to the town's economy.

How do you grow sweetcorn?

When it first emerges from seed, sweetcorn is a tiny, delicate little shoot. In fact, it looks just like any old skinny blades of grass when it first pokes out of the ground! Some sweetcorn plants are even protected by plastic mulching sheets when they are planted in the early spring, just like the picture below. Mulching sheets have many purposes, such as suffocating weeds, keeping moisture in the soil and protecting the tiny shoots from bugs and pests without the need to use pesticides. How handy! 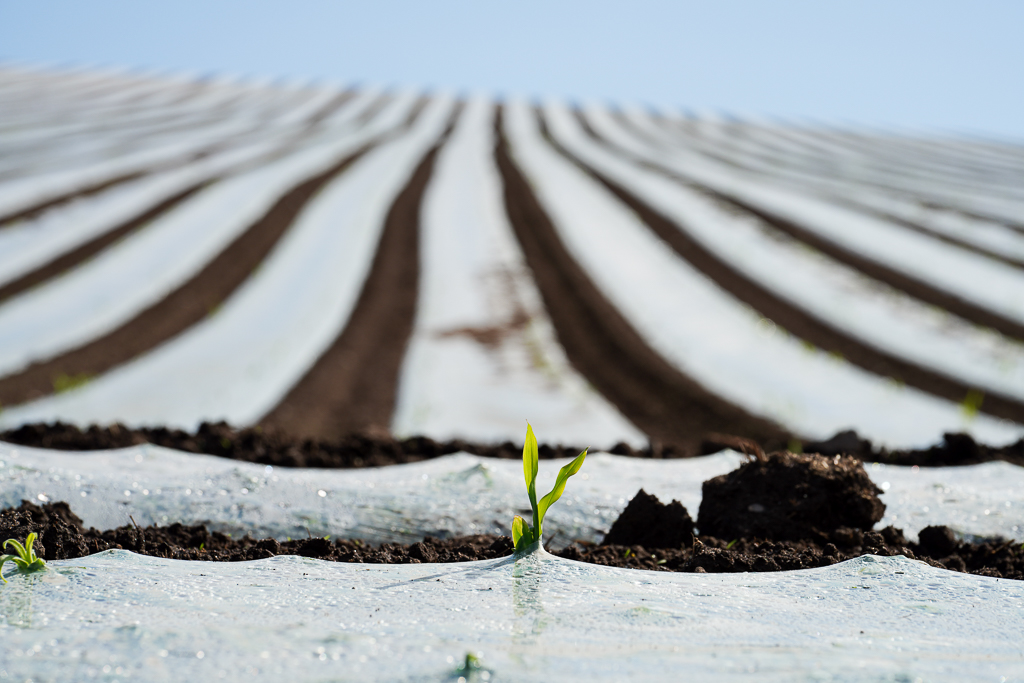 A tiny corn shoot, protected by a mulching sheet. 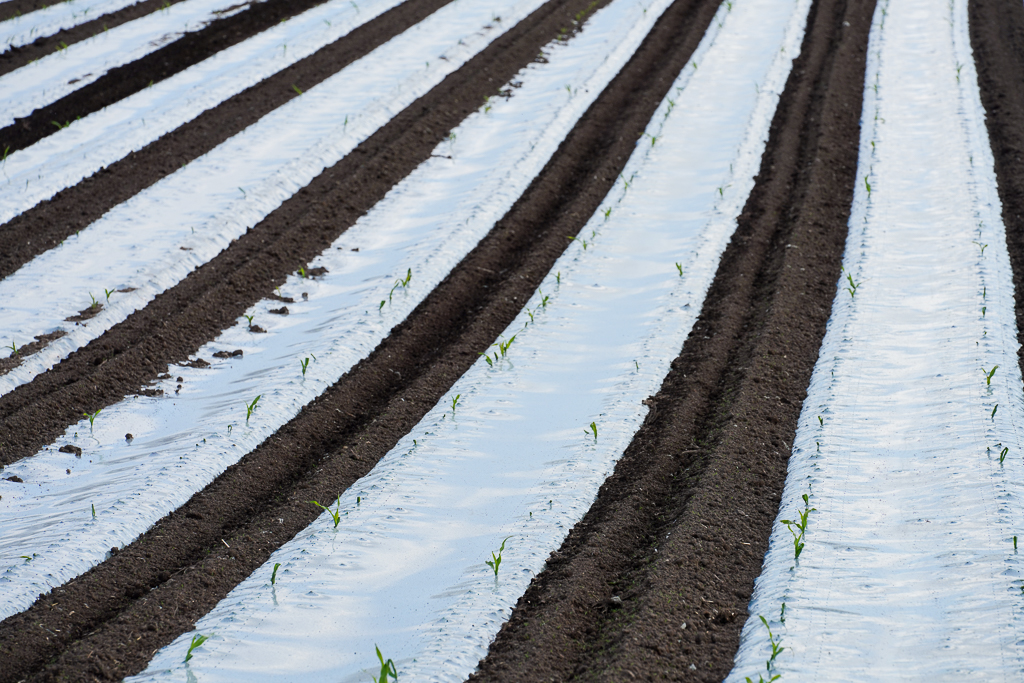 They are so tiny at first that it's hard to even see them!

Sweetcorn is also wind-pollinated, so it is planted in blocks instead of rows to best accommodate this. This means its layout in the field often looks a little different to other crops.

If the weather is sunny, some varieties of sweetcorn plants can grow incredibly tall—over 7 feet high! However, most varieties tend to peak out at 4 ~ 5 feet. 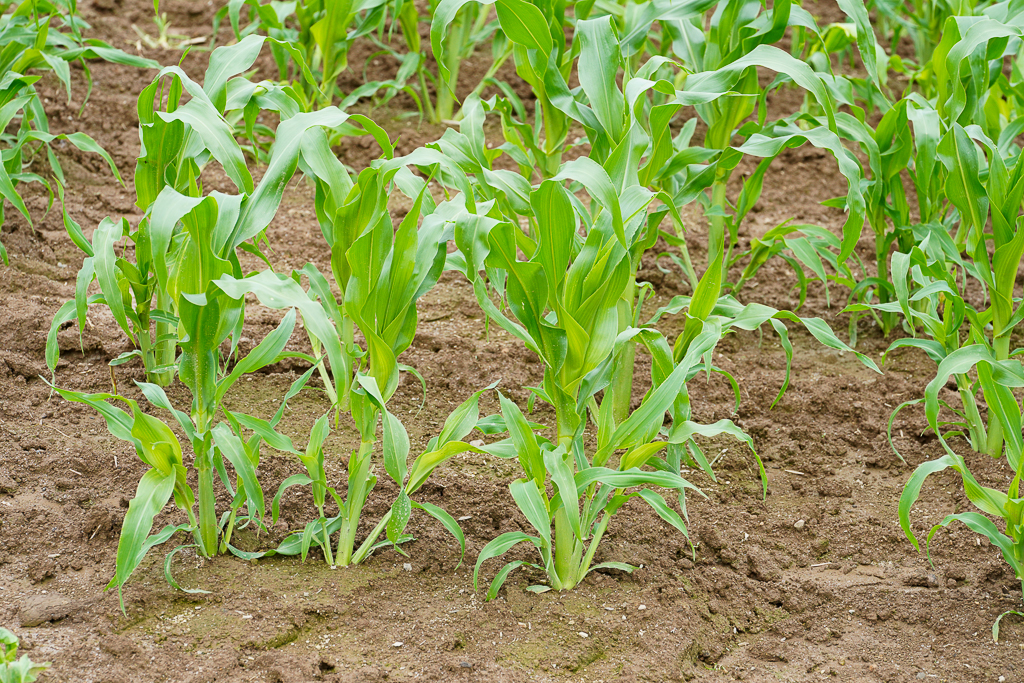 One day, little corn, you might be taller even than me!

How do you harvest sweetcorn? 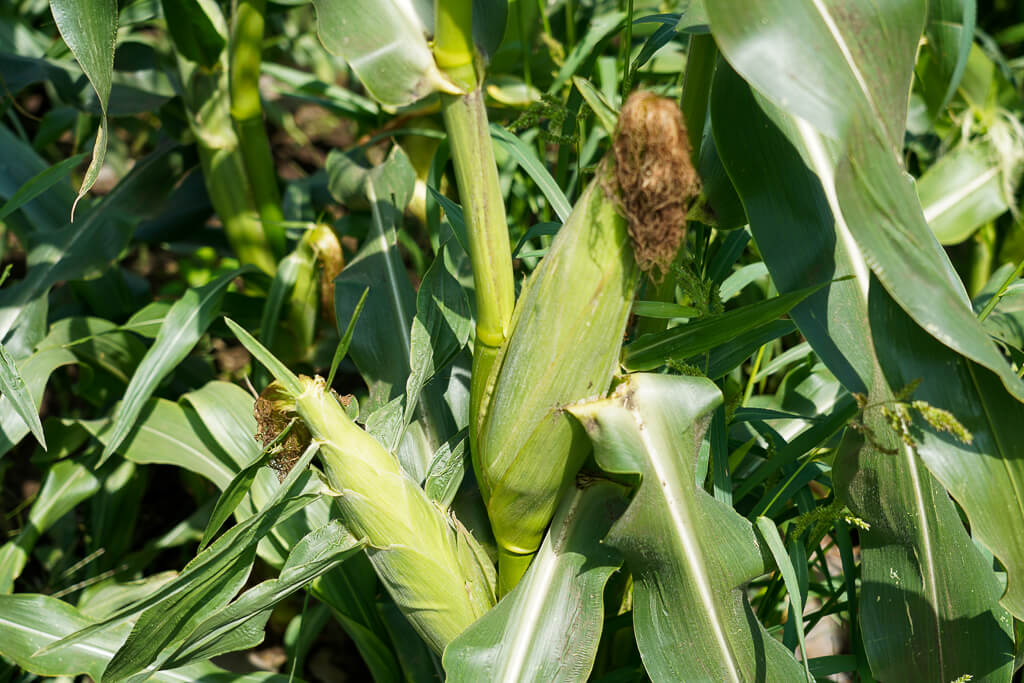 Ready for harvest? What do you think?

The plants gradually get taller and taller. As the ears approach harvest, farmers have to take great care to protect them from animals. It's not just humans that like yummy sweetcorn—fresh, ripe corn on the cob is an easy meal for Biei's hungry wild animals. Cheeky raccoons, noisy crows and even curious brown bears are all attracted by such a delicious feast! 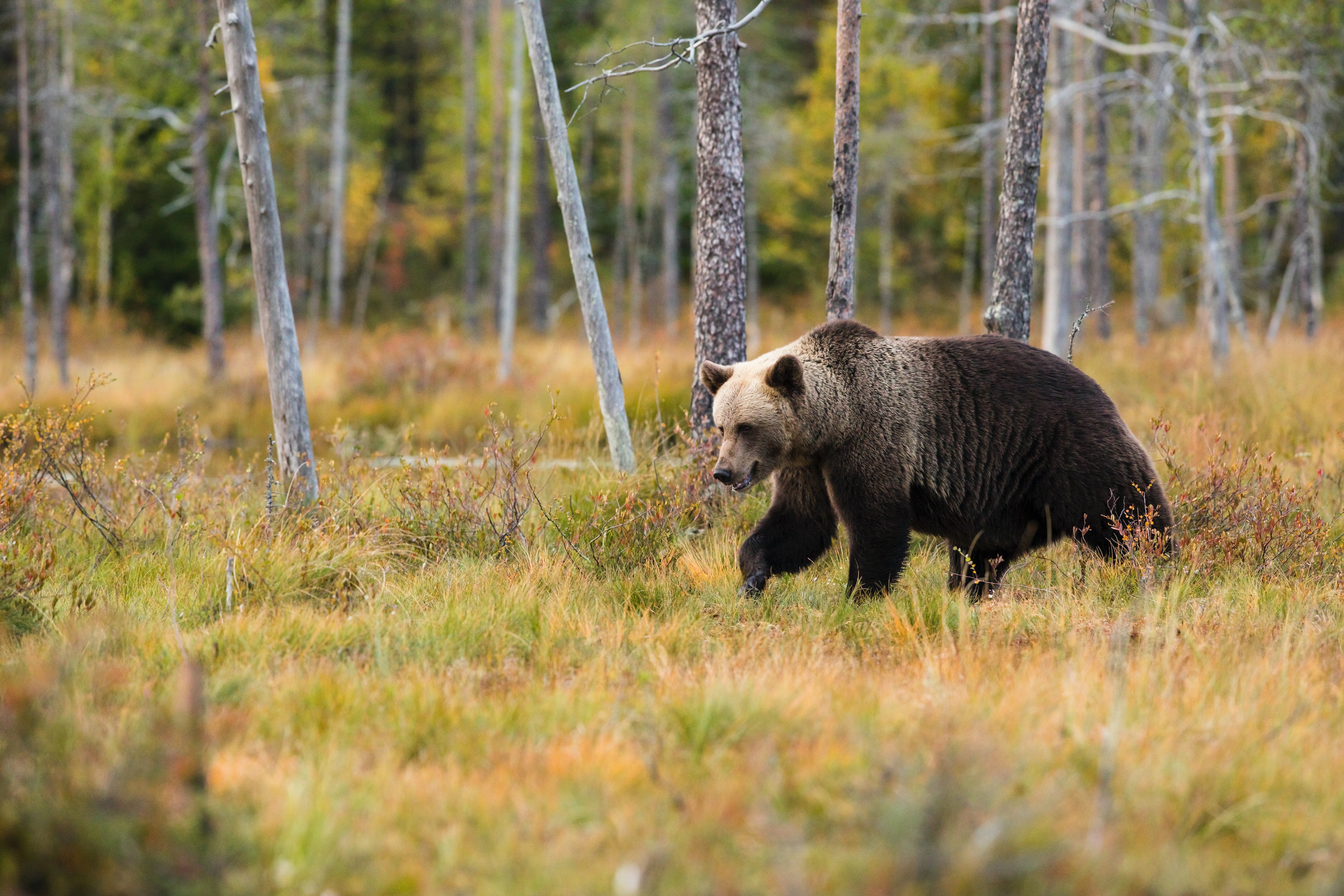 "Hmmhmm, I wonder if I can find some tasty sweetcorn around here...?"

Finally, in August through to September, the corn is ready for harvest. But how do you check if it's ready when it's hidden in a leafy husk?! Well, Biei's farmers have two strategies! The first is to look at the fuzzy string coming out of the top of the ear, known as “cornsilk”. When it turns from yellow to dark brown, that's a sign that the corn is ready for harvest. Farmers also squeeze the top part of the ear to check if the fruit inside has plumped out. If they can still feel space inside, it means the ear is not quite ready. Of course, you can also pull back the leaves of the husk to look inside but as soon as those leaves are pulled away, the fruit is susceptible to diseases and pests so this isn't the most sensible way to check. It must be a challenge for Biei's farmers to work out whether or not an ear is ready! The "cornsilk" in this picture is brown, so this ear of corn is ready for harvest!

As with many crops in Biei, it is possible to harvest corn with machinery but many farmers prefer to harvest by hand. This helps them to quickly and easily identify which corn are ready for harvest. 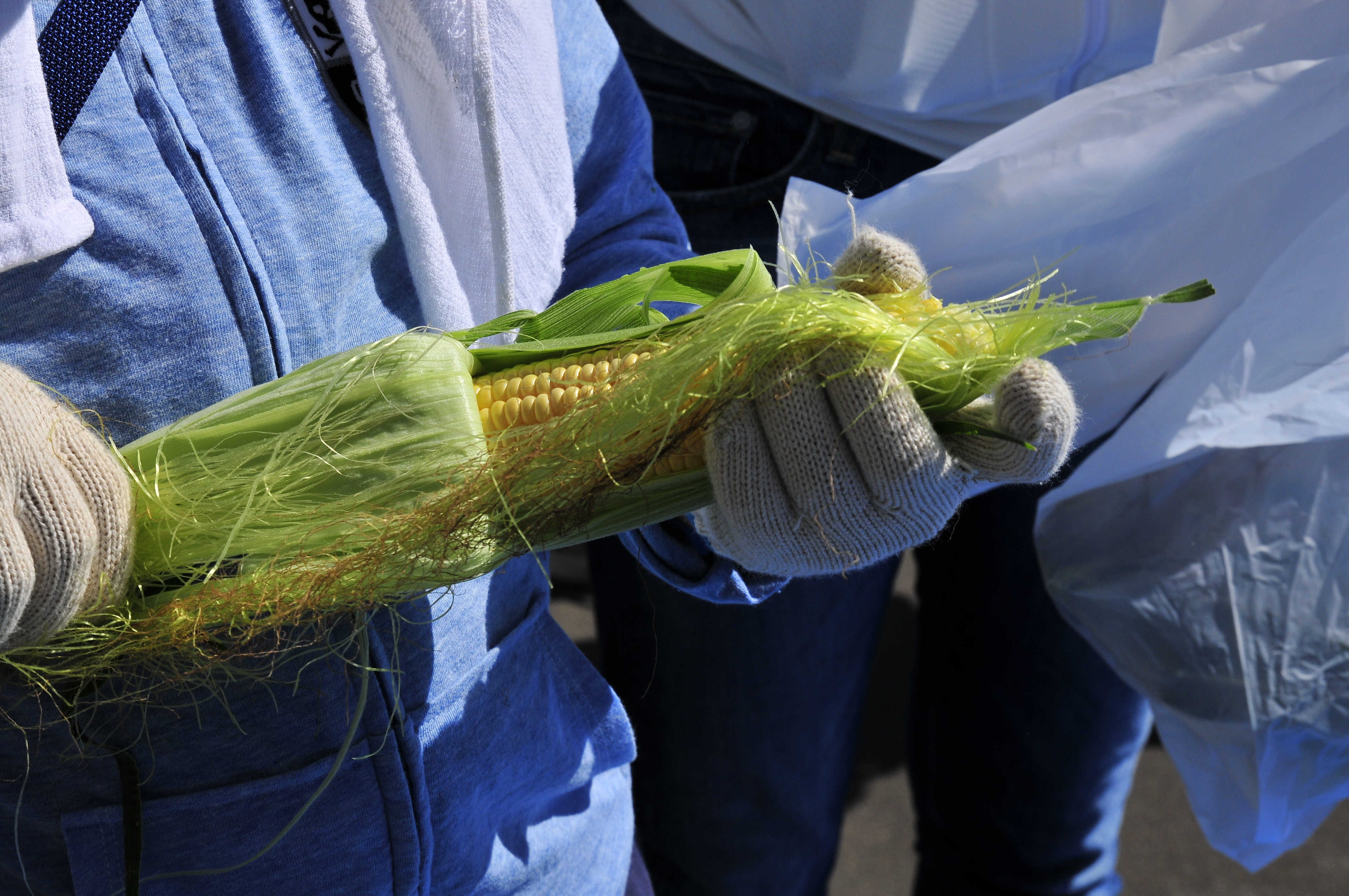 What kind of sweetcorn can I try in Biei?

Here's a question for you… what colour is sweetcorn, usually?

Did you guess yellow? Well, in the case of Biei, that answer is only half right! Here in Biei, we grow not just yellow but also white varieties. The most commonly-grown varieties in Biei are Gold Rush (yellow) and Pure White (white). What is the difference between white and yellow corn, you may ask? Yellow corn has a higher concentration of beta carotene, a naturally occurring yellow-orange pigment that gives corn its colour. This actually makes yellow corn slightly better for your health than white corn, as beta carotene breaks down into Vitamin A when digested. White corn has a higher sugar content, which means it is so sweet you can even eat it raw!

But why don't you be the judge? You can join our special summer program and experience harvesting corn from a Biei field, as well as taste-testing both white and yellow corn! I wonder which one you'll like the best? And if you would like to purchase fresh Biei sweetcorn to cook at your accommodation, we highly recommend you do so at Biei Senka, our local vegetable market selling fresh, seasonal produce from Biei's fields. 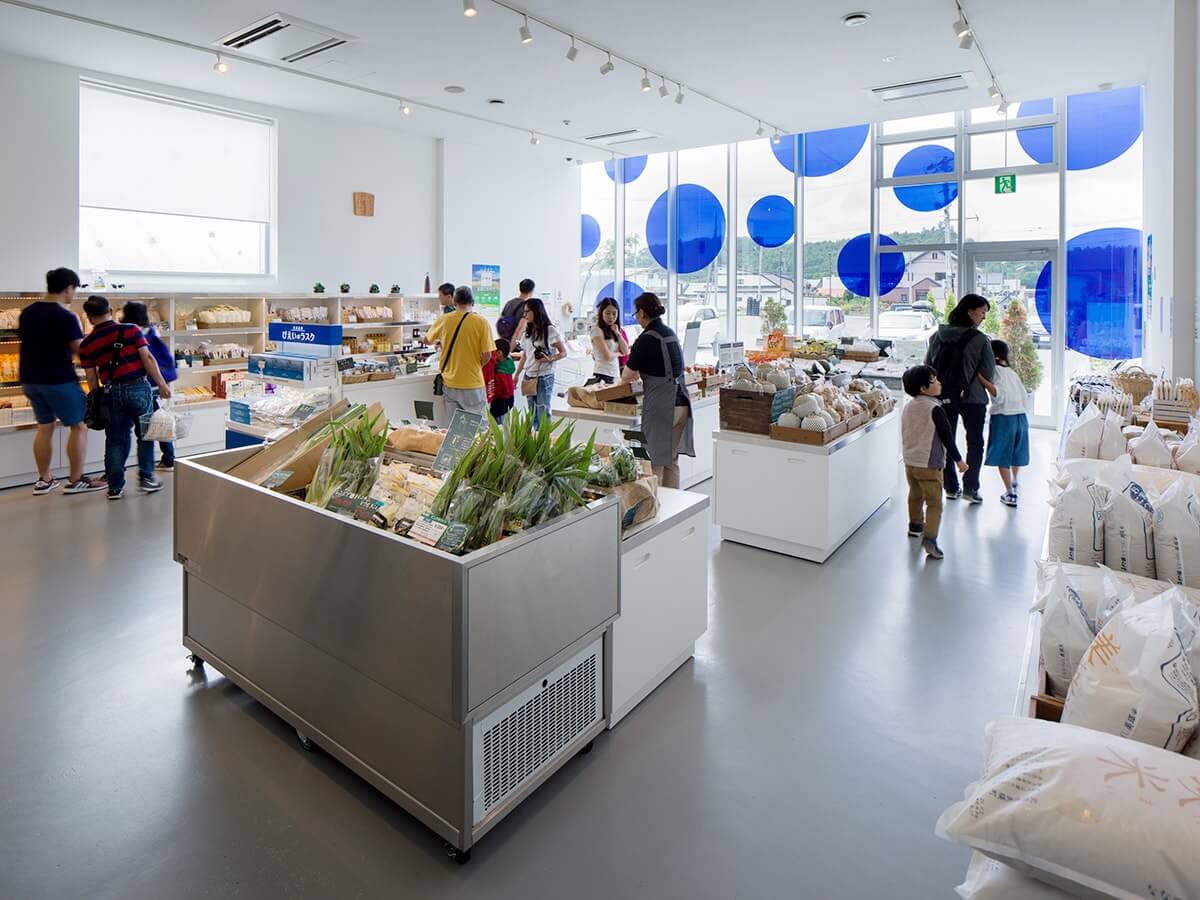 On the other hand, if you're a little short on time then the following restaurants serve special corn-themed menus during Biei's sweetcorn season. We hope that you will enjoy this seasonal crop while it is on offer! 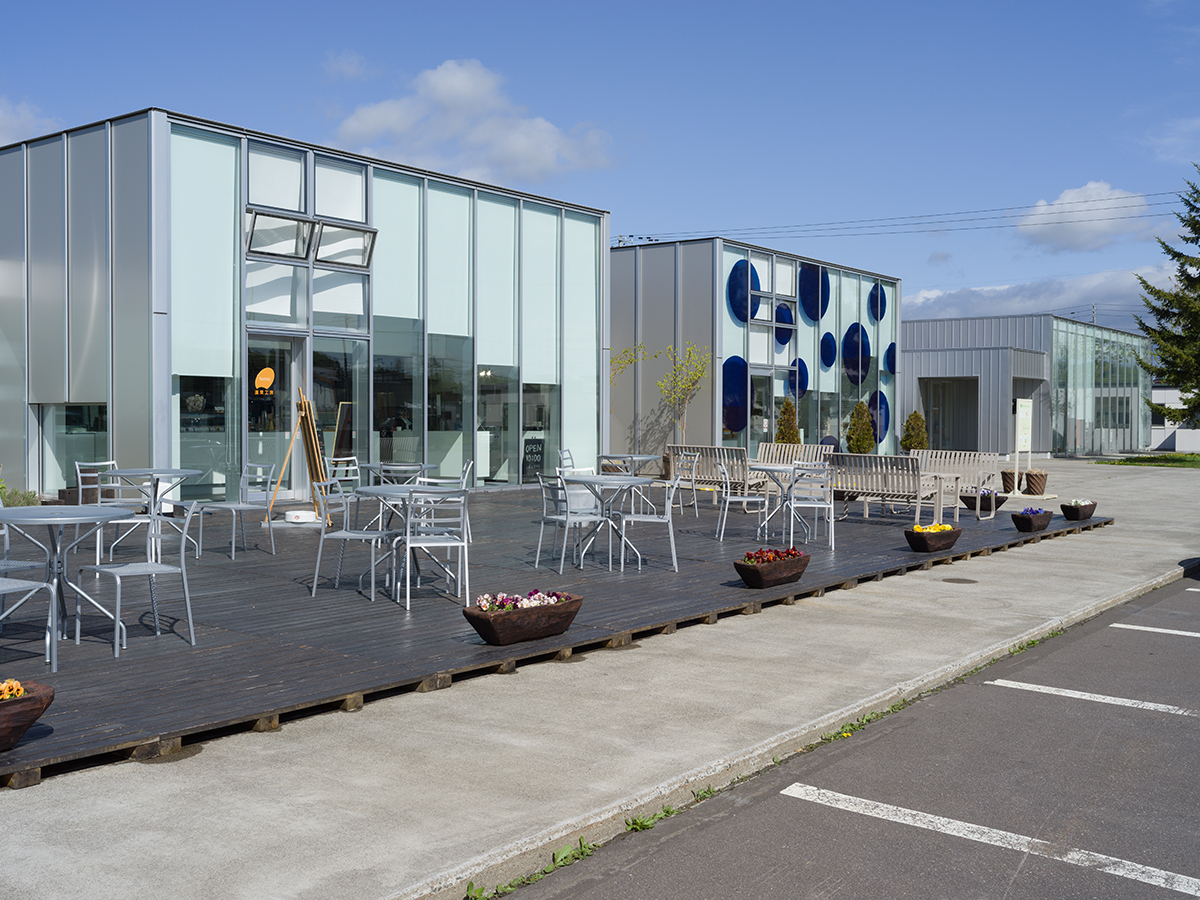 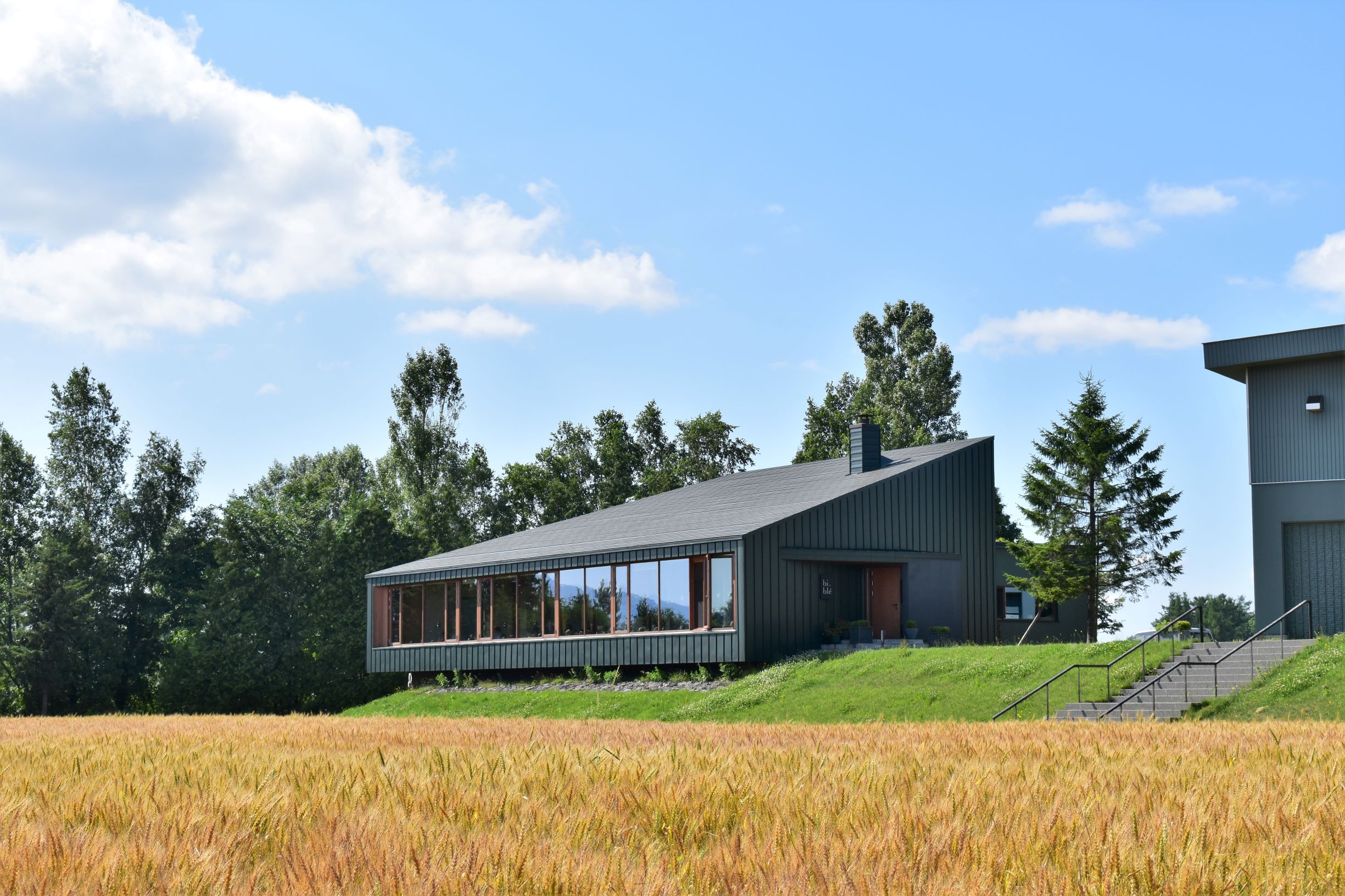 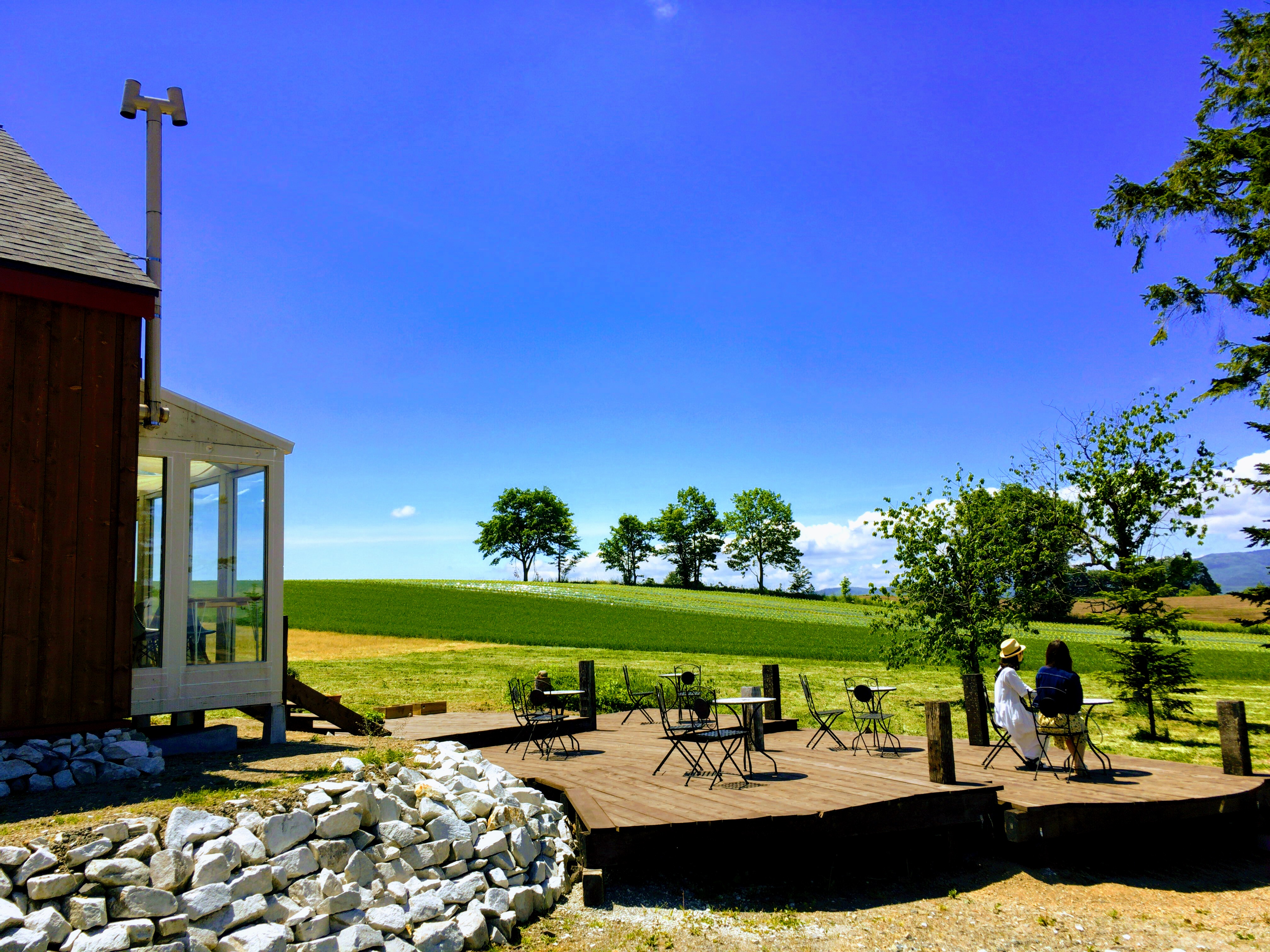 Gold from the earth… won't you come and sample Biei's delicious summer sweetcorn?