Hokkaido is by far the number one producer of Japan's potatoes. Biei contributes its fair share, and has grown potatoes for almost as long as the town has existed. If you were to ask a Biei local what crop they most associate their town with, many of them would likely answer "potatoes". 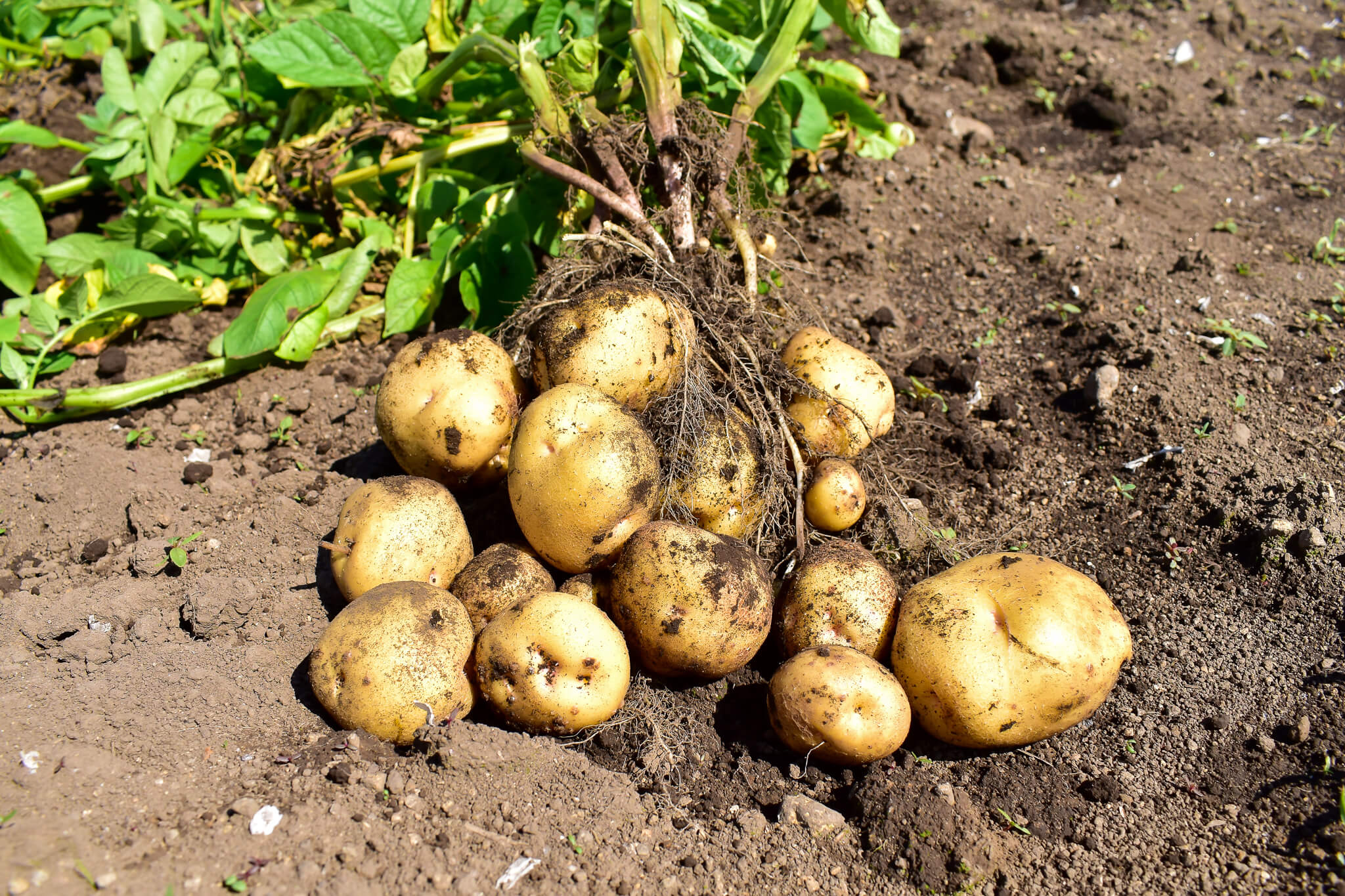 In fact, Biei consistently ranks in the top 20 producers of potatoes in Japan! Not only that, but many farmers are contracted to large Japanese snack companies. Whenever you enjoy Japanese potato snacks, you might be enjoying potatoes from Biei!

Potatoes are also an important part of Biei's crop rotation cycle, along with beans, wheat and sugar beet. So they are not just economically important, they also contribute to our Patchwork Hills scenery and help to keep the soil healthy for future generations.

What do you suppose these unusual things are? 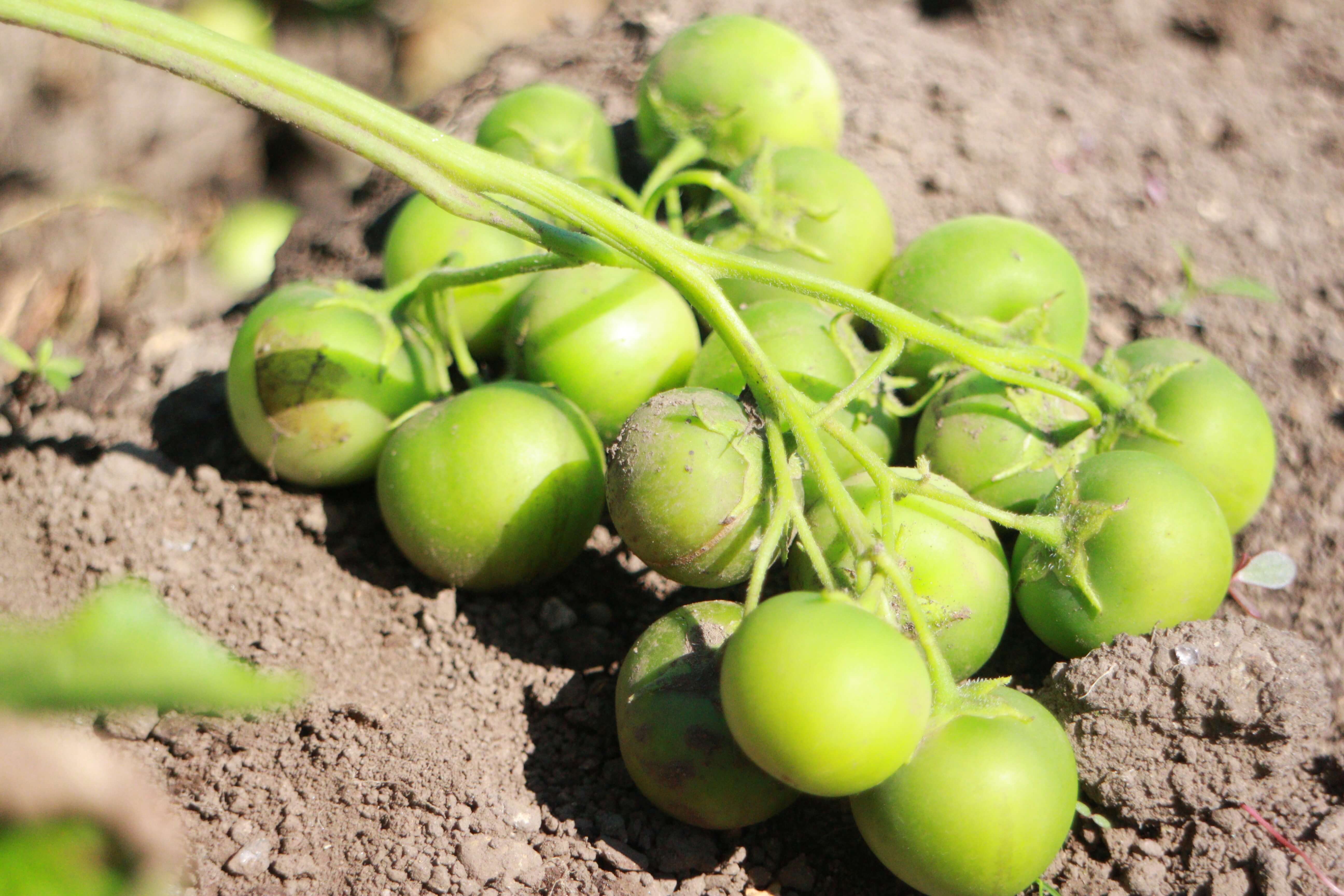 "Hmm?! That thing grows on potato plants?! But it looks just like a tomato...!"

Well, you're almost right... if we're getting technical, it is a kind of tomato! Tomato and potato plants are actually closely related and are both a part of the "nightshade" family, which also includes bell peppers and eggplants. This is why the potato fruit looks a lot like a tomato! 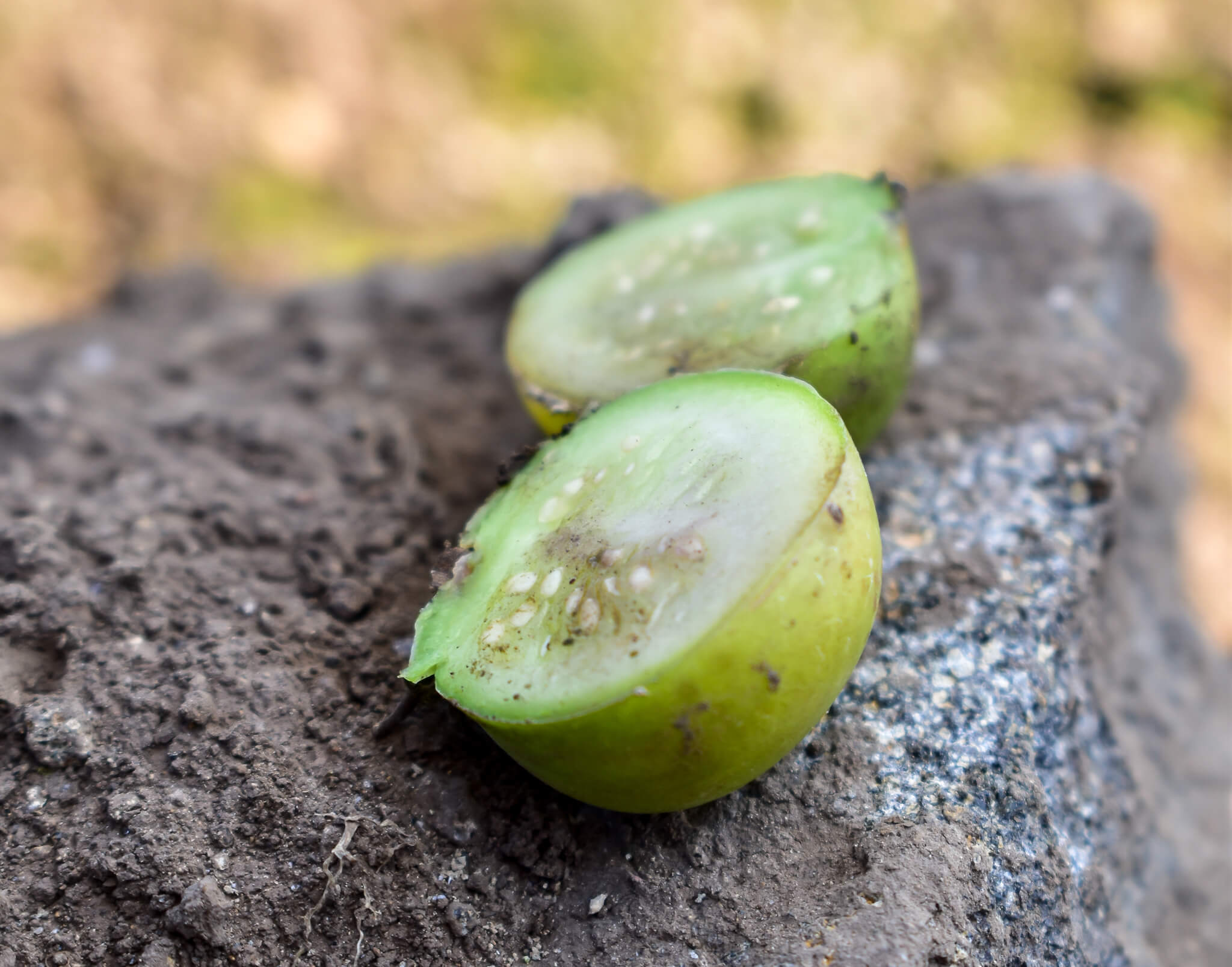 Cut it in half, and the similarity to a tomato becomes even more obvious!

Of course, the fruit is not the part of the potato that you eat and it is in fact toxic to humans. The part that you eat is the roots, which grow under the soil. In order to make the harvest in summer more efficient, Biei's farmers plant the tubers in these distinct mounds in potato fields. If you see these mounds in a field, you may be sure that it will produce potatoes! 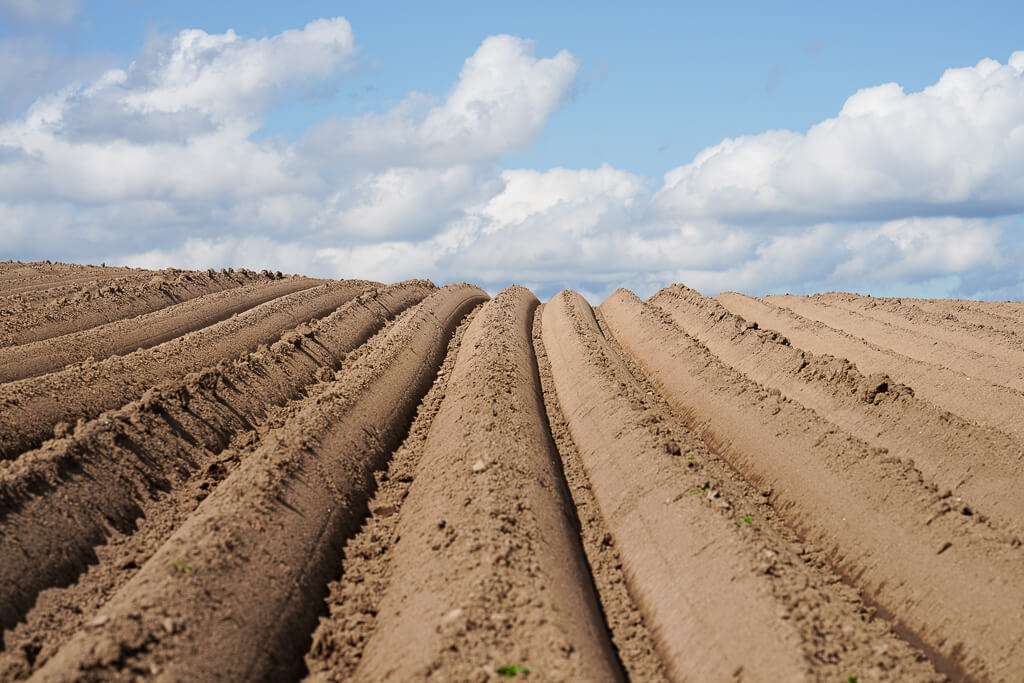 The perfect shape of the mounds is so pleasing to the eye...

As the weather warms up in June, the plant begins to sprout. It gradually gets bigger and taller, and a wonderful surprise waits for us around June-July...

These beautiful flowers are not ornamental... these are in fact the flowers of potato plants! Their natural look makes them all the more beautiful.

Depending on the variety of potato, the colour of the flower is different. For example, some varieties produce flowers in a very pleasing purple colour, like this. 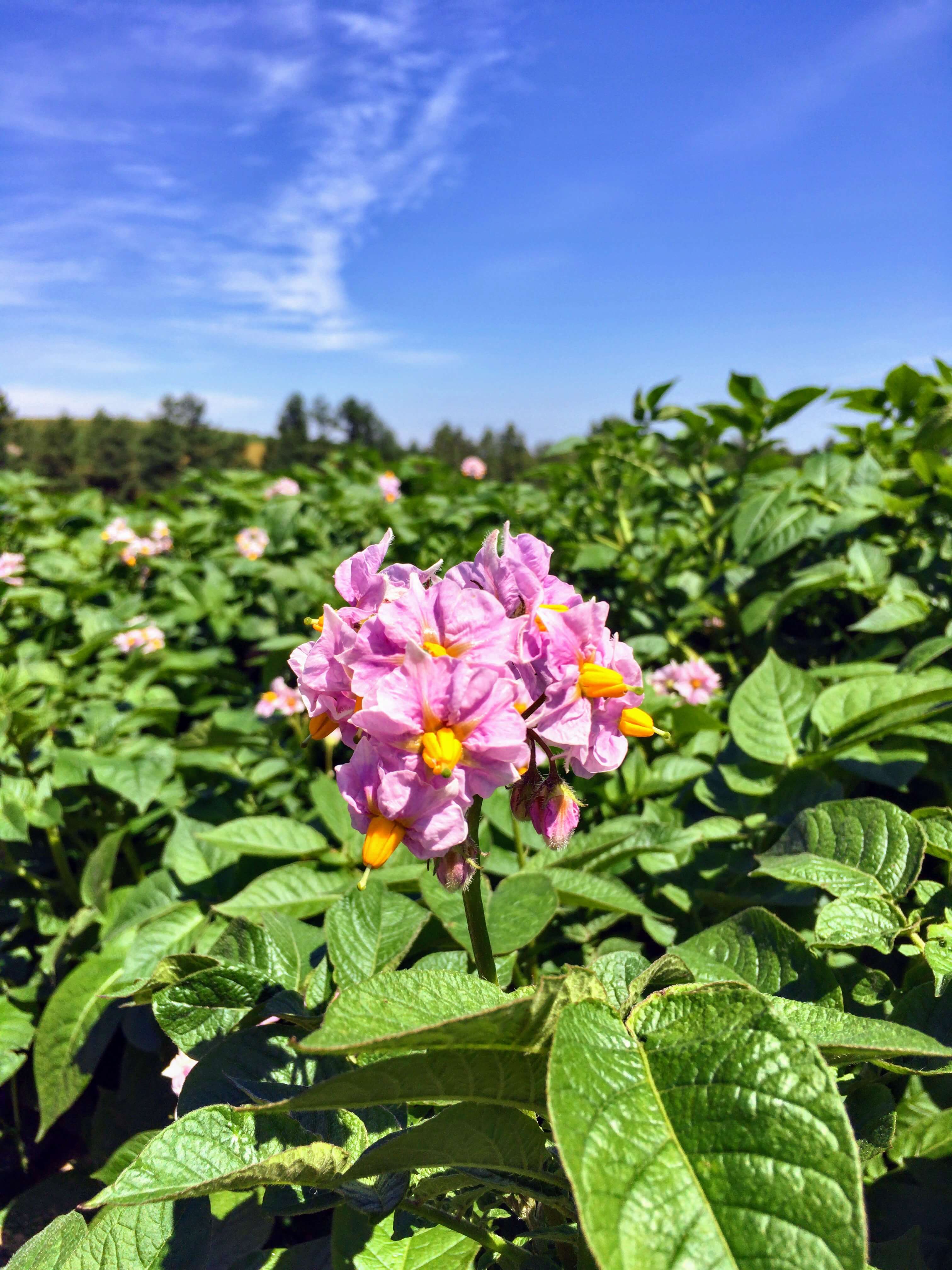 These are the flowers of the Kita-Akari variety, which is quite popular in Hokkaido.

Of course, Biei's potatoes are not planted for our visual enjoyment! After the flowers drop off, the real work begins...

2Can you dig it? Harvesting Potatoes!

Remember those mounds that Biei's farmers heaped up? When the harvest season arrives, it becomes quite clear why they use this strategy!

Potatoes grow deep underground and as Biei's soil is exposed to the elements at all times, the soil can become hard and compacted over the farming season. If potatoes were planted in flat ground, this would make digging them up quite a challenge! It is also likely that the potatoes may be damaged, or impossible to find in the soil.

But if planted in raised ridges like this, we only need to unearth them from this raised area of soil and we don't need to waste time doing lots of digging! 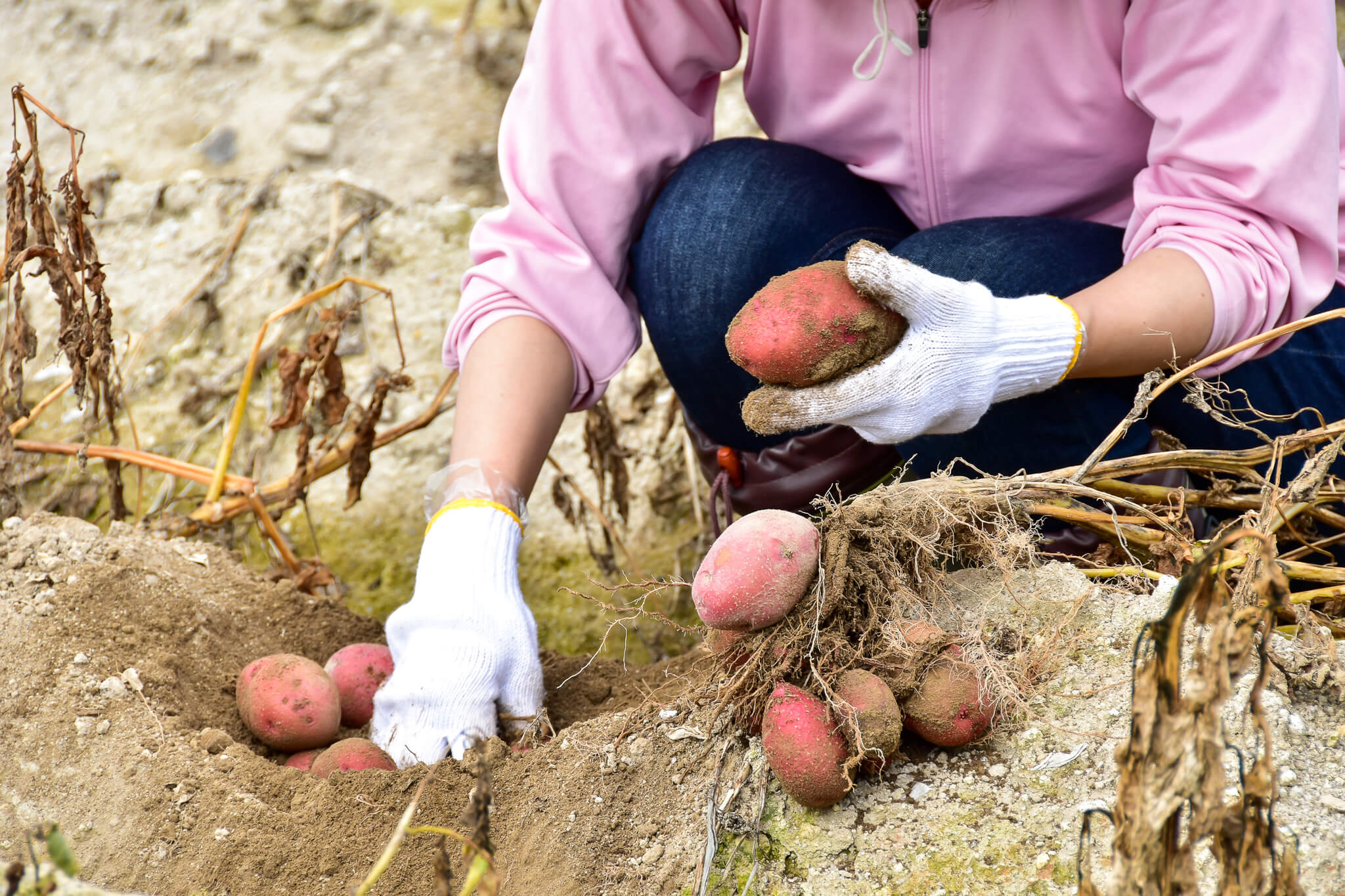 A little brushing of the soil, and potatoes appear just like that!

Of course, most of Biei's potato harvests are done by machinery. Again, planting them in mounds makes the machinery's work much more efficient.

On top of the harvester, farmhands separate out properly grown potatoes from rocks and dried stems and misshapen potatoes. 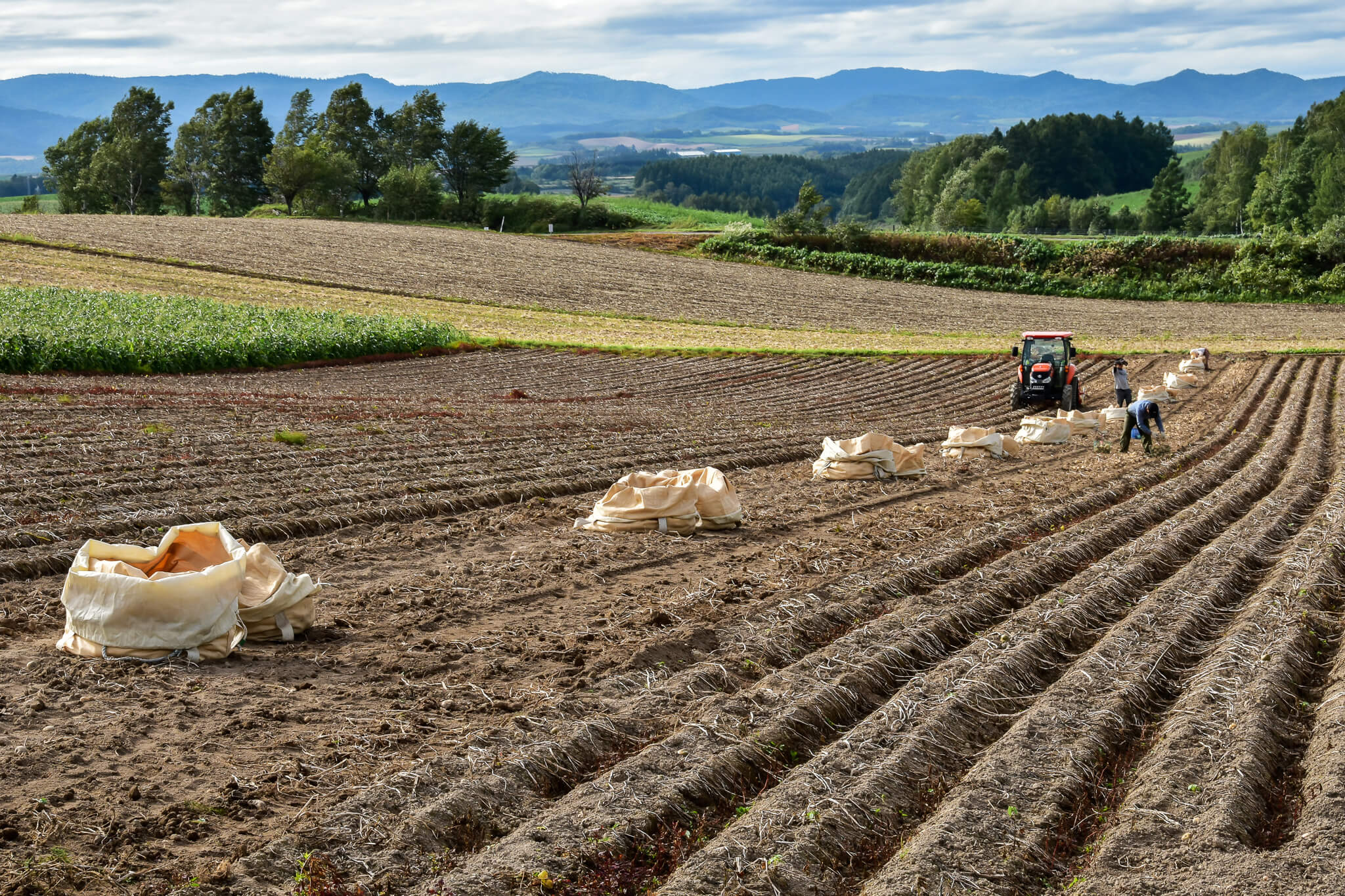 This is a bit of an old-fashioned way to do it, with the potatoes in this field unearthed by a tractor while farmhands gather them and put them into those huge sacks.

"Wait a minute... There are so many different colours!" 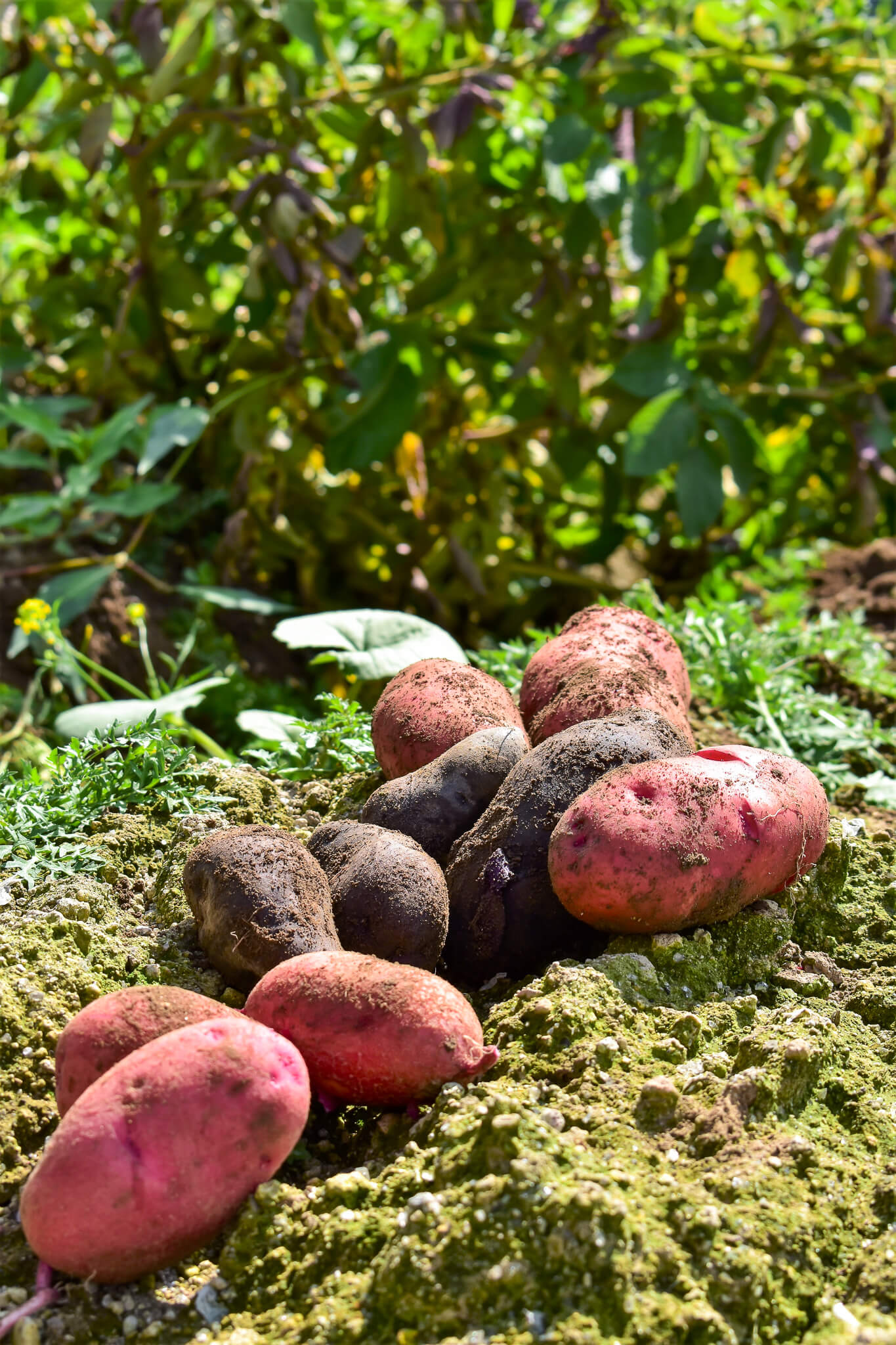 That's right! You didn't think that potatoes were just yellow and brown, did you? There are over 5,000 different varieties of potato in this world, all of which can be used for different things.

For example, the reddish "Red Moon" potato in the picture above, which has a dark pink skin and orange-yellow flesh, almost like a sweet potato. As it holds its shape better than classic yellow potatoes, it is ideal for dishes like stews or curries.

There are also unusual varieties like the "Shadow Queen", which is a deep purple from its skin right the way through to the centre! I wonder what you can make with purple potatoes?

When cut in half, these potatoes look like this! 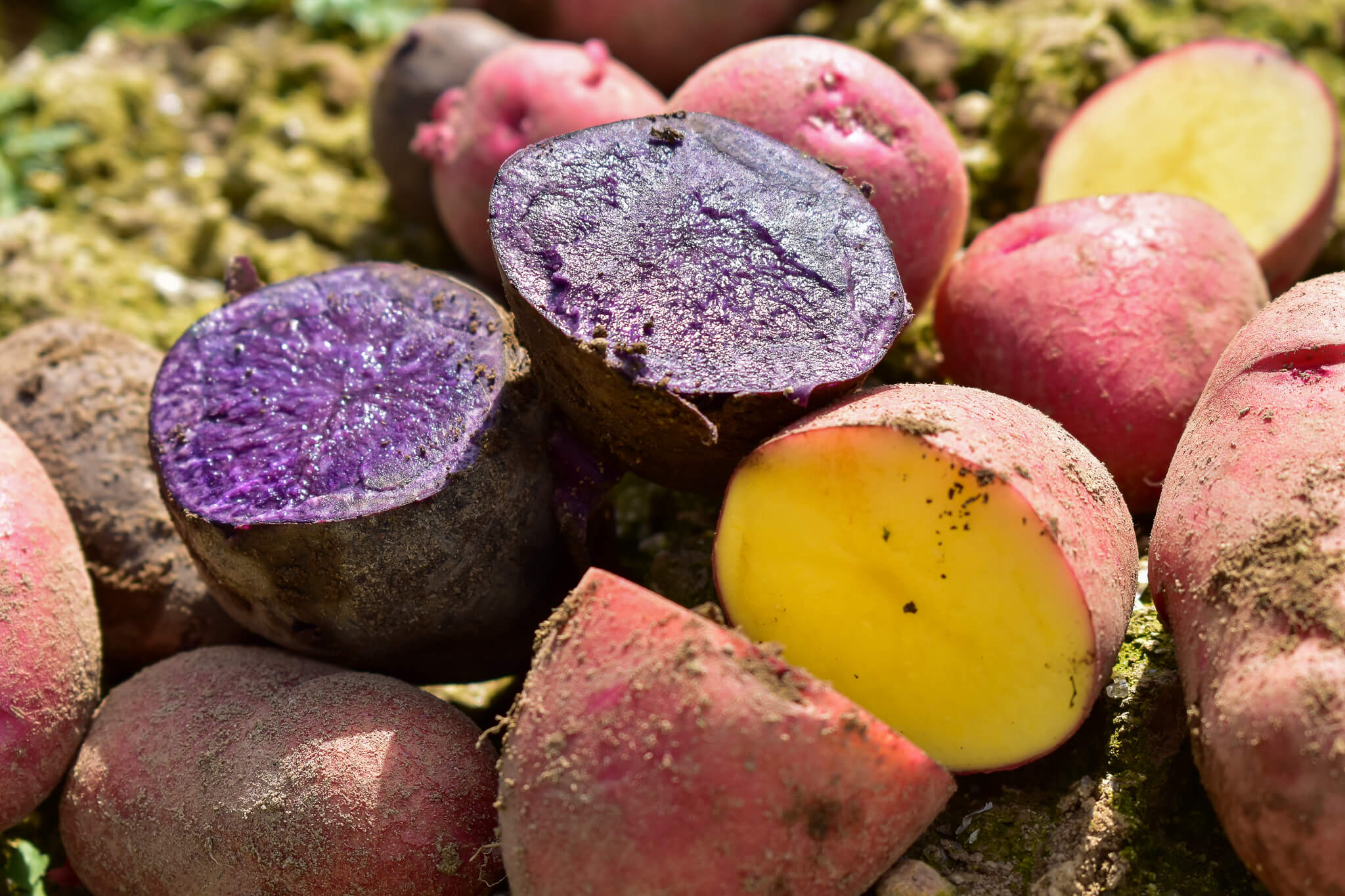 A red-and-yellow variety like Kita-Akari, as well as the deep purple Shadow Queen. 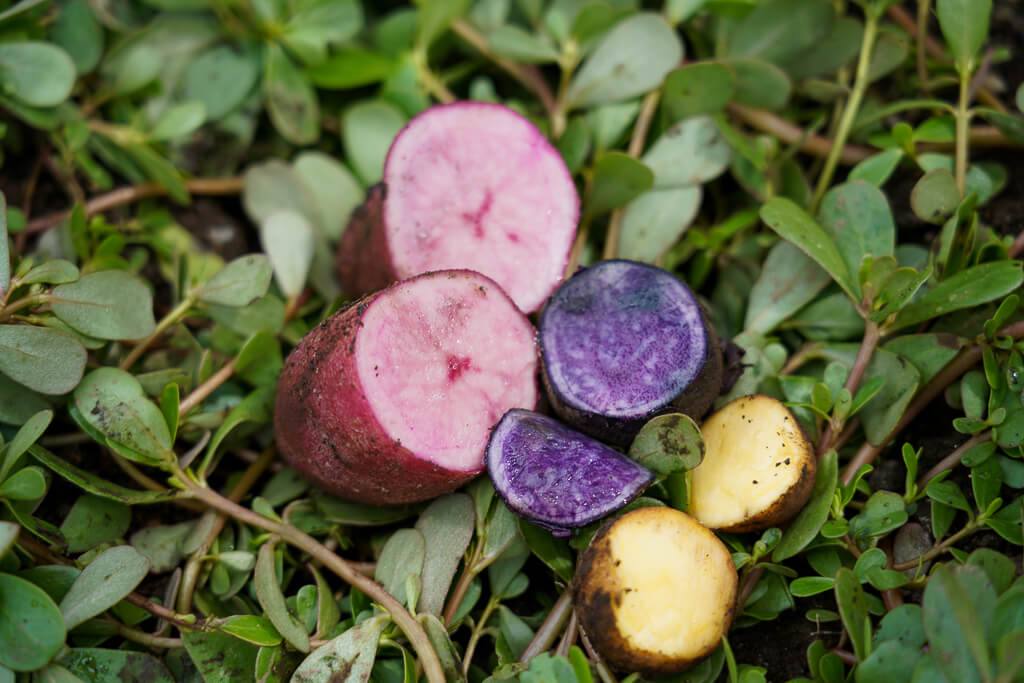 In this photo, the pink potato on the left is a variety called "Northern Ruby" and the yellow baby potato on the right is "Inca-no-Mezame".

We highly recommend the delicious baked potato, a large Biei-grown potato served with creamy butter made from the milk of Biei cows. It's absolutely delicious, and a great way to experience the natural taste of Biei's potatoes! 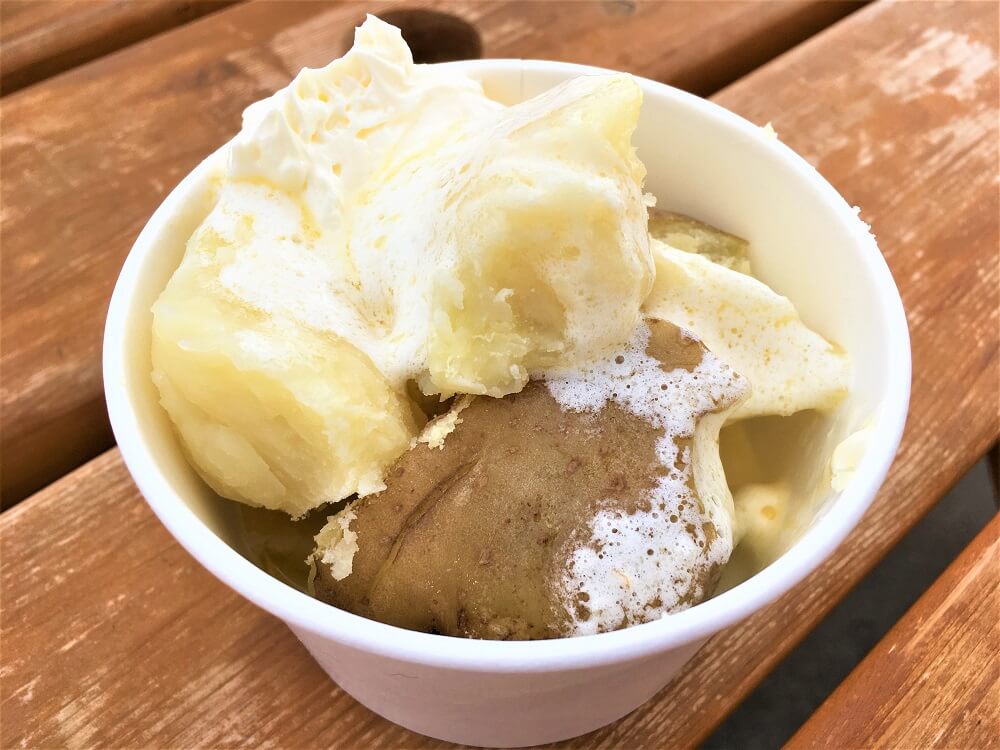 A creamy and fluffy baked potato from Biei Senka!

Several restaurants and accommodations all over Biei use Biei-grown potatoes in their cooking, too. We recommend a stay in town to take your time enjoying Biei's potatoes!

If you would like to take some of Biei's potatoes home with you, why not consider these limited-edition potato chips? They are sold after the potato harvest in autumn through to the following winter and are made exclusively with Biei potatoes. These make wonderful souvenirs from Biei, or a good snack for your flight home! 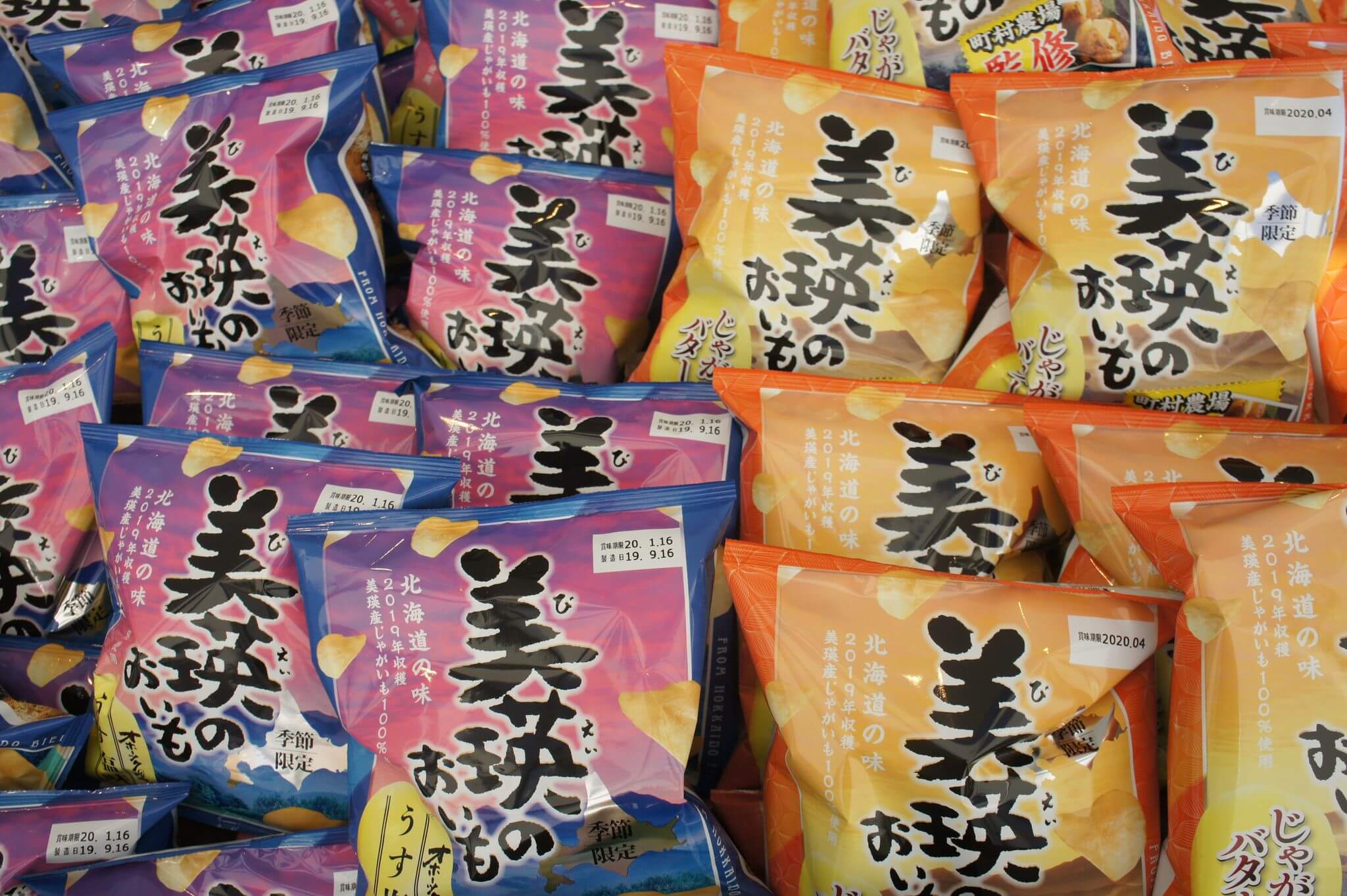 The flavors change every year! In 2019/2020, the flavours were "Lightly Salted" and "Buttered Potato".

But wouldn't you like to enjoy harvesting Biei's potatoes yourself?

Be my BIEI is proud to offer a fun potato-harvesting experience in cooperation with Biei's farmers. Head to a potato farm and dig potatoes up with your bare hands. But they're not just any old potatoes... you'll get to dig up potatoes of all kinds of colours, and even some quite rare varieties, too! Look forward to seeing what potatoes you'll unearth as you dig. And if you live in Japan, you can keep your potatoes to take home!

This is a special experience program that will allow you to fully appreciate the charm of Biei's potatoes. We hope you'll give it a try someday!

Dig potatoes with your own hands!
Colourful Potato-Digging Experience

Potatoes- fruits of the earth.
Come and savour the pride of Biei with your eyes and your tastebuds!