Biei in early spring... fresh green, and earthy hills.
Suddenly, a tractor crests the hill with a rumble.

Biei's winter is long. From December to April, snow is piled high on the hills.

During this time, Biei's farmers enjoy a well-earned break. With more time on their hands, you can often find them in cafes and restaurants throughout Biei in winter, relaxing before spring comes and work has to begin again. Meanwhile, under the snow, the earth waits for the warm sunlight...

Then, around mid-late March, just as the temperature peaks above zero in the afternoons, these mysterious, swirling black patterns appear on Biei's hills! 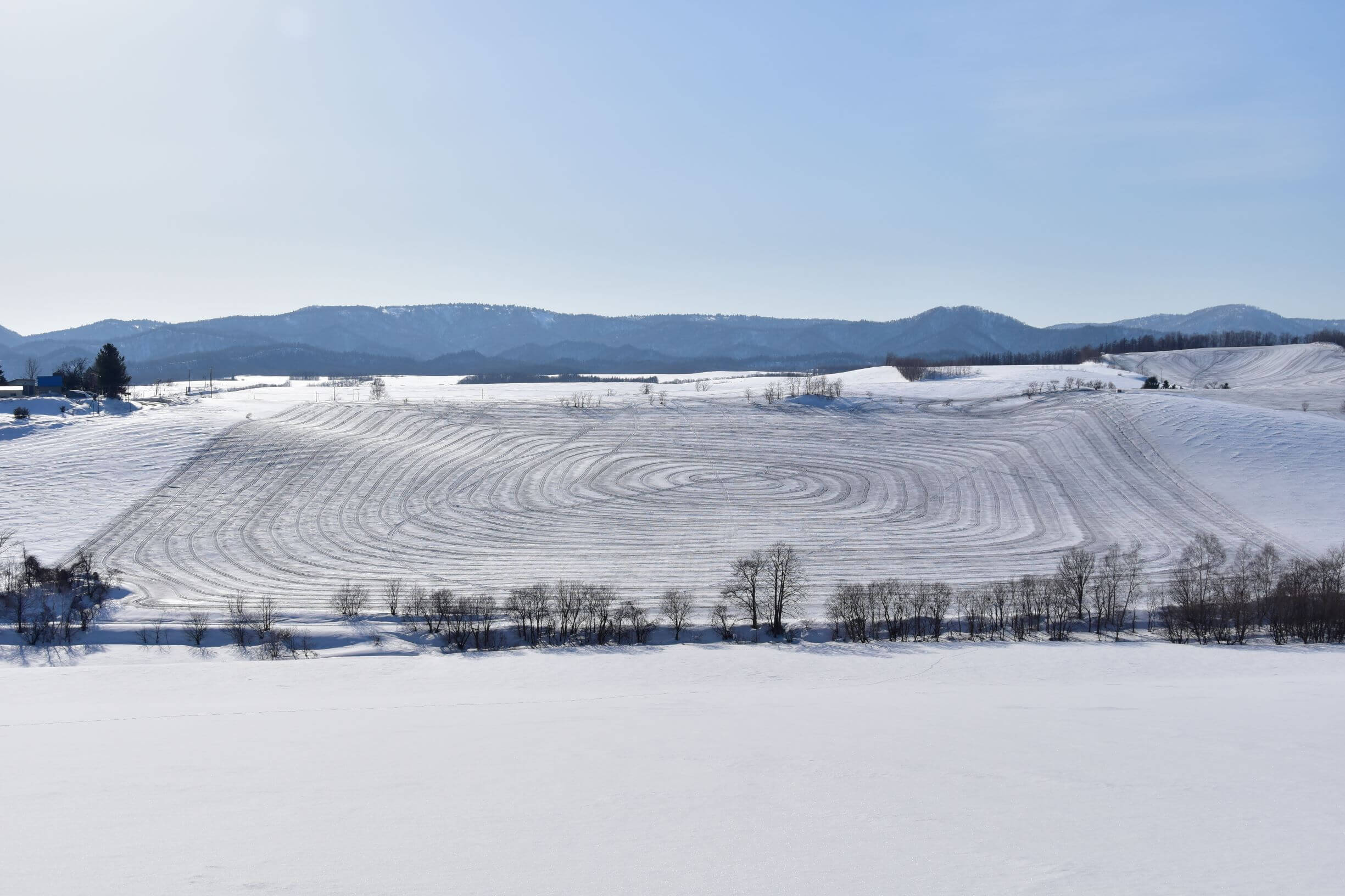 What could they be? A strange pattern made by wild animals? Maybe they are an imprint left behind by off-world visitors...?! 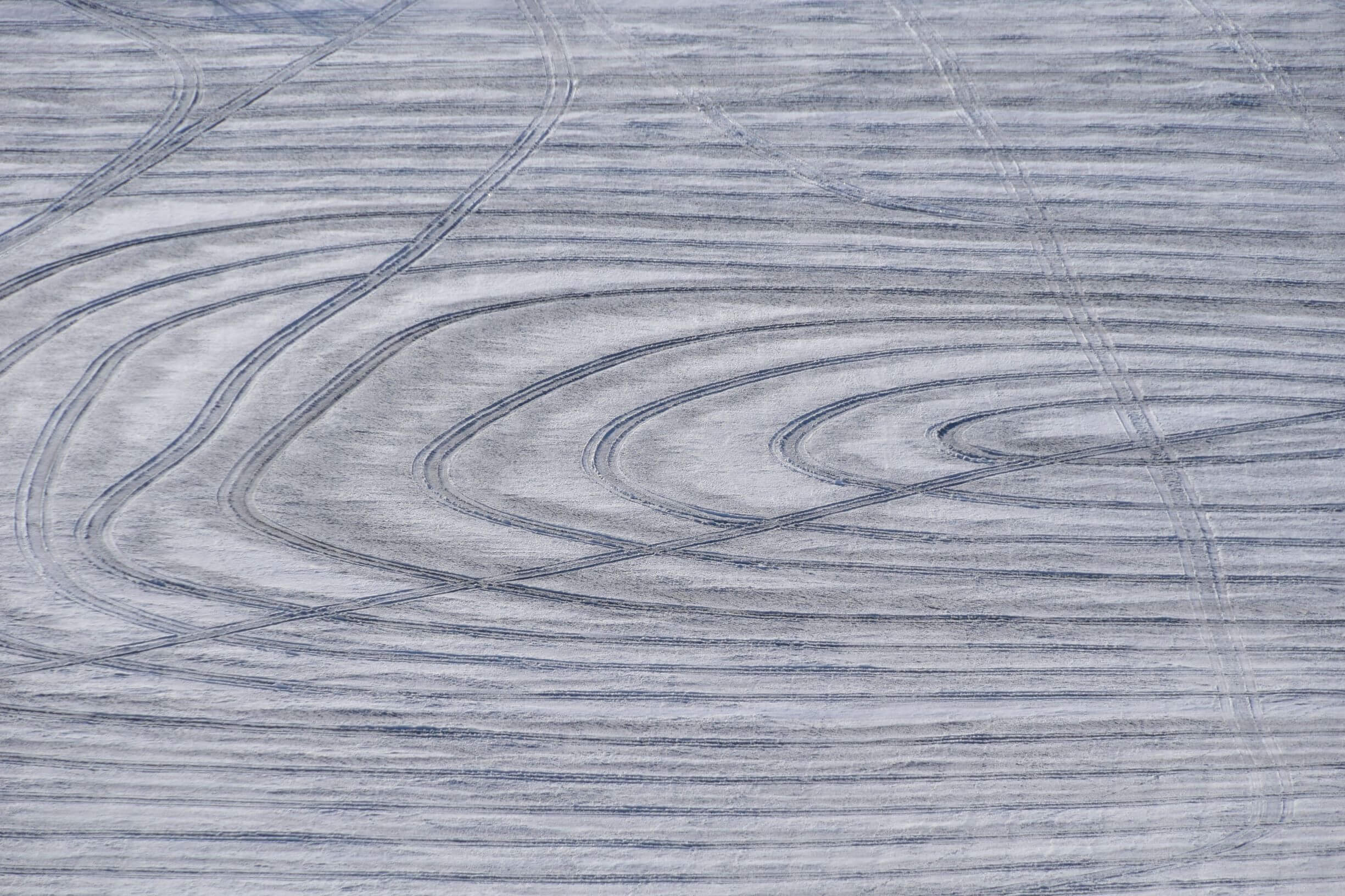 Actually, these patterns are deliberately carved into the snow by farmers on snowmobiles. They are the tracks of dispersed snowmelt agents. Snowmelt agent is usually a charcoal-based substance spread over the fields just as the thaw begins. Farmers strap huge bags of the stuff to their snowmobiles, and off they zoom, drawing amazing, geometric patterns into the white hillsides! In truth, snowmelt agent only accelerates thawing by about a week, but even just one week is valuable time for Biei's farmers. You can learn more by checking out this video by Biei photographer Mr. Haruo Kikuchi.

Finally, by the end of April, the snows melt and the fields are clear. It's time for the work to begin...

The First Colours in the Hills are... man-made?!

You might think that once the snow melts in April, Biei's patchwork hills emerge just like that and the hills are alive with colour!

Well, we hate to be the bearers of bad news, but... 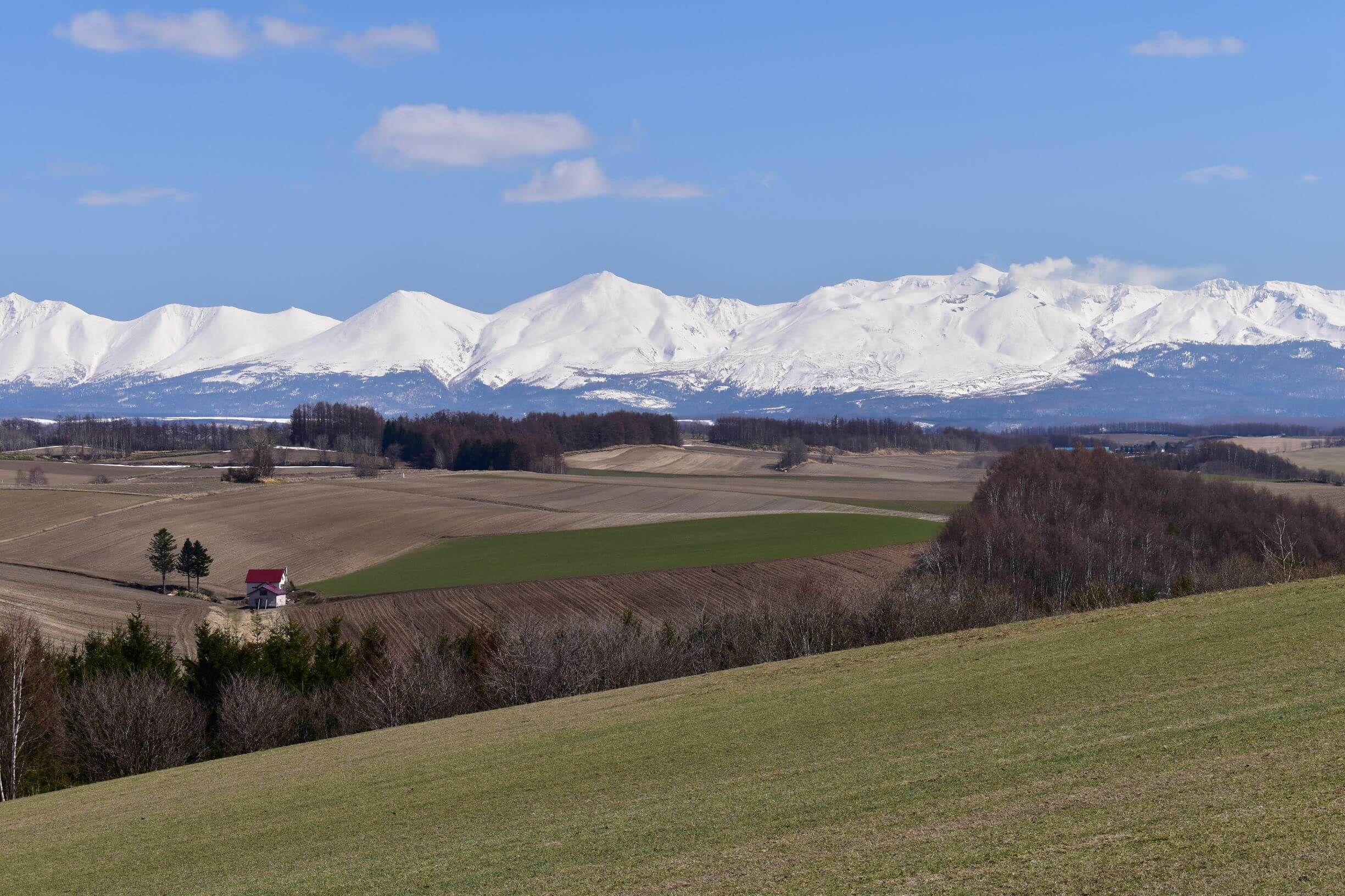 As you can see, it is not as picturesque as you might hope! This is due to the fact that the crops that will eventually grow to form the squares in Biei's patchwork pattern have yet to be sown. Without them, there is nothing to colour the fields.

What's more, it is still too early for new spring leaves, which do not tend to emerge until May. Other grasses and flowers, compressed under the snow and without sunlight for months, have turned brown. So Biei's April palette is quite earthy and muted, as you can see.

However, every now and again, a pop of colour in the hills may catch your eye... 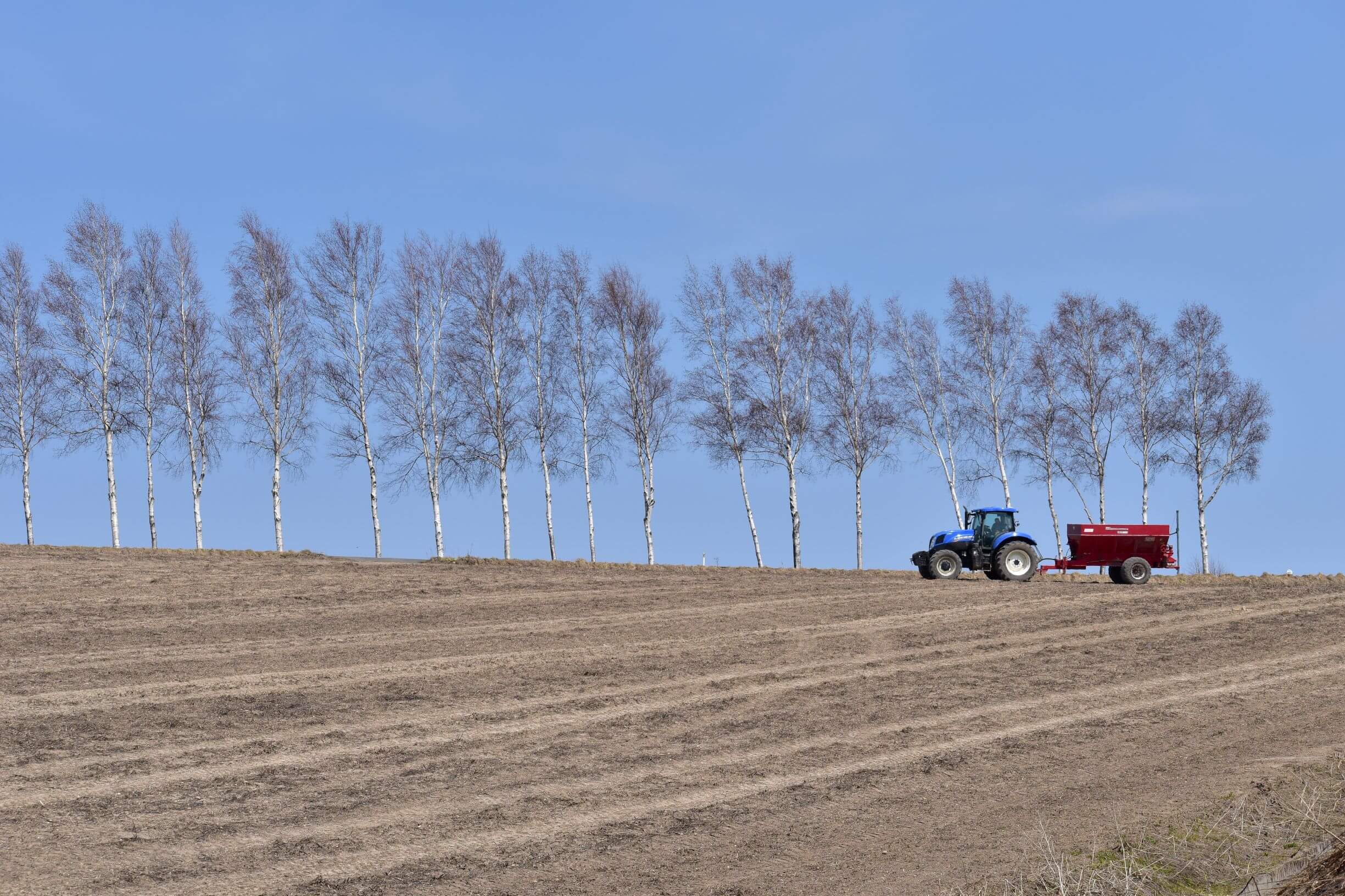 For the first time in months, tractors are moving in Biei's hills!

One of the first task for Biei's tractors is to plough the soil. Buried under the snow, the soil becomes hard and compacted. Ploughing it helps to loosen it and mix the dry topsoil layers with the moist, dark subsoil where all the good stuff is. This brings nutrients to the surface and prepares the field for sowing or planting crops.

As they go about their April work, bright blue, green and red tractors provide a welcome burst of colour against the drab landscape. 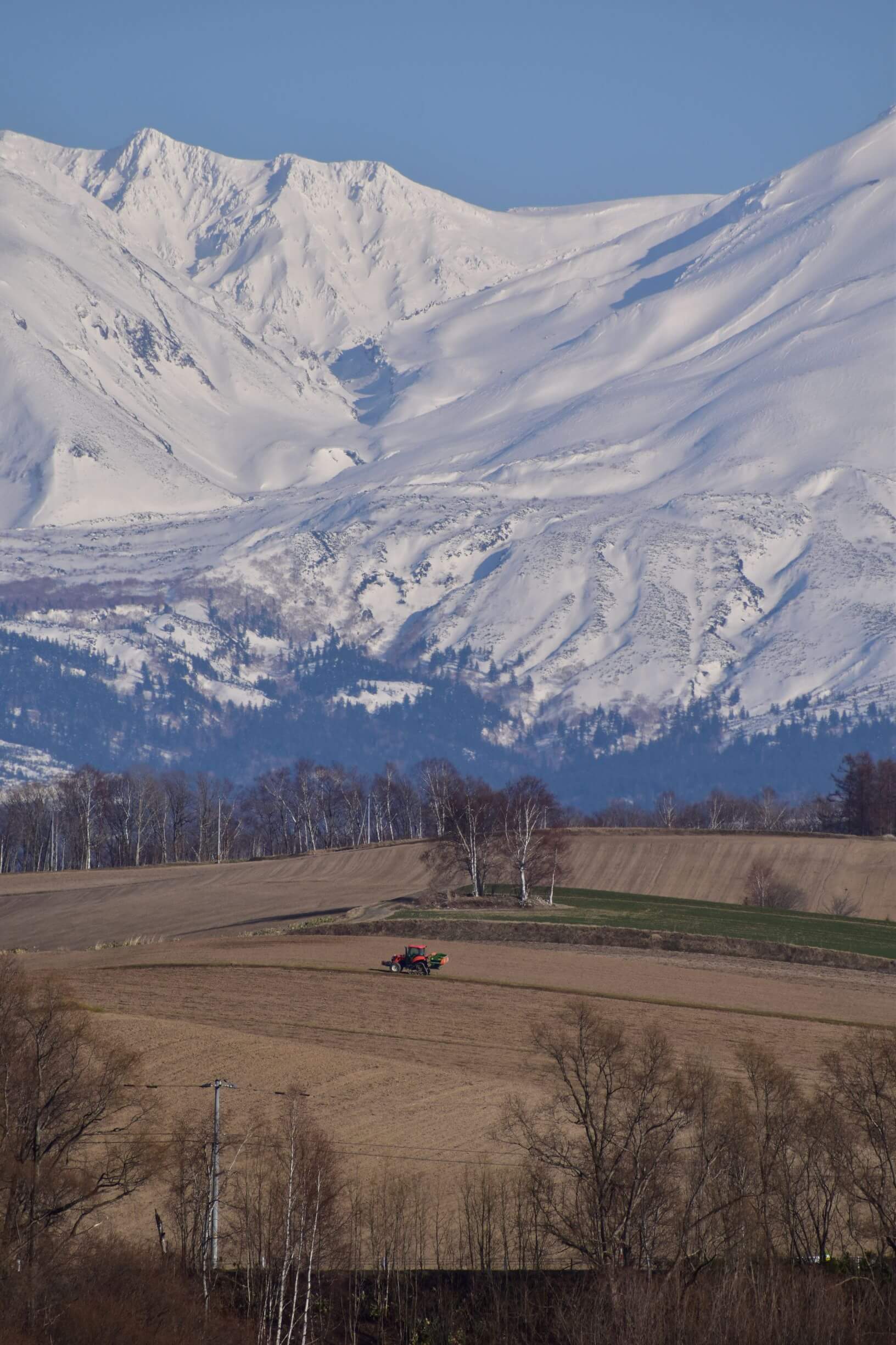 A tractor goes busily on its way below the Tokachi Mountain Range in April.

Soon enough, May rolls around. By May the sun is warm enough and the soil nutritious enough that it's time to start planting crops!

Tractors - A Miracle of Modern Farming

Biei's crops are not planted at random. Bearing in mind that the crops will grow taller or expand outwards as they get bigger, each of Biei's crops need to be planted a specific distance apart. Some crops, like potatoes, also need the soil to be shaped into mounds to make the harvest process easier.

120 years ago when colonists first settled in Biei, planting and sowing would have been done by hand or by horse. Considering Biei's fields are several hectares big, can you imagine how much time this back-breaking work must have taken by hand?! 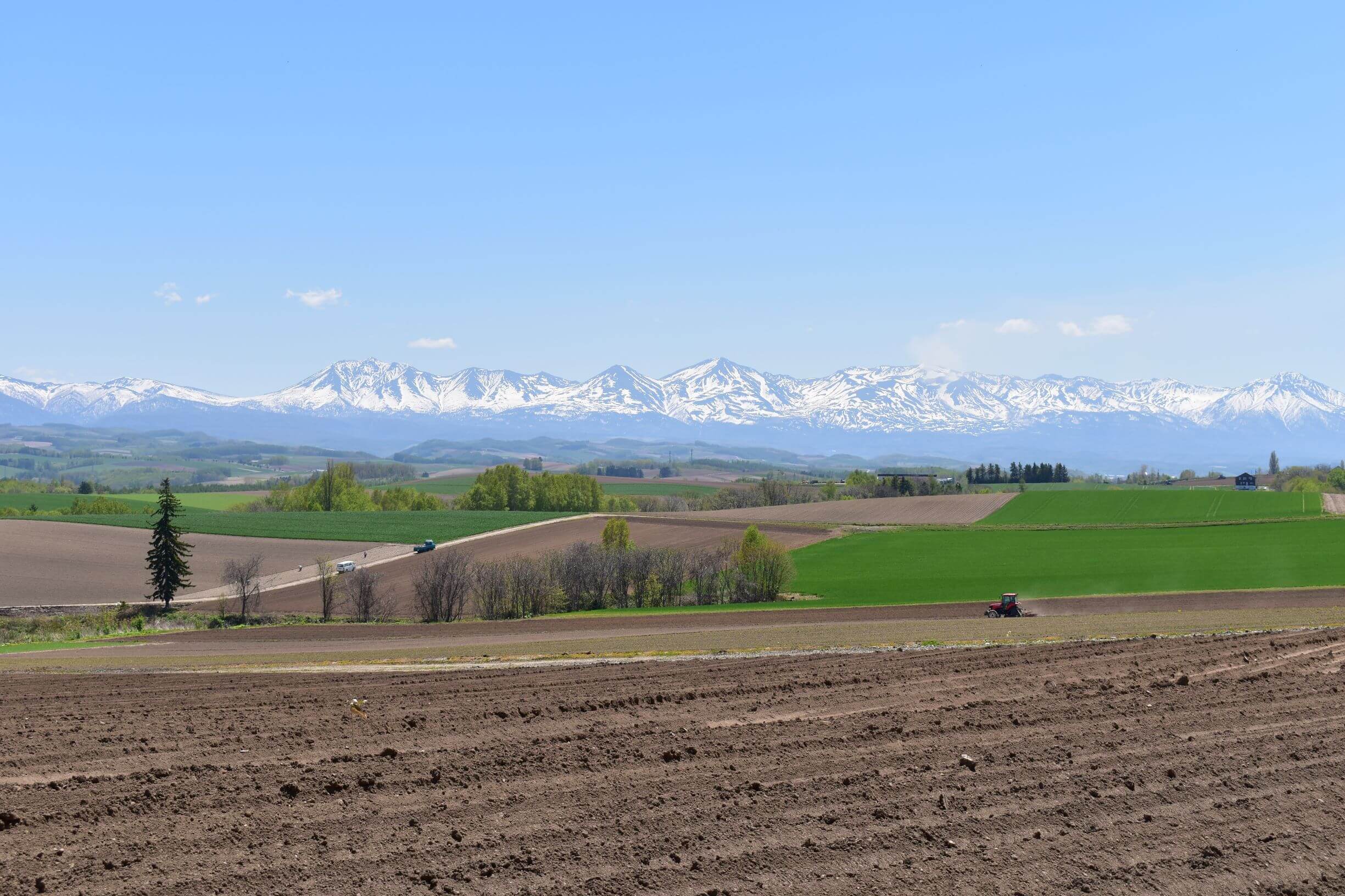 Fortunately, tractors came to the rescue during the mid-20th century. They helped farmers to cross vast fields much more quickly and took the labour out of planting crops. These days, tractors are so advanced that with just a few adjustments of a computer, they can automatically plant crops at the intervals desired with mathematic precision! Technology really is a farmer's best friend, wouldn't you say? 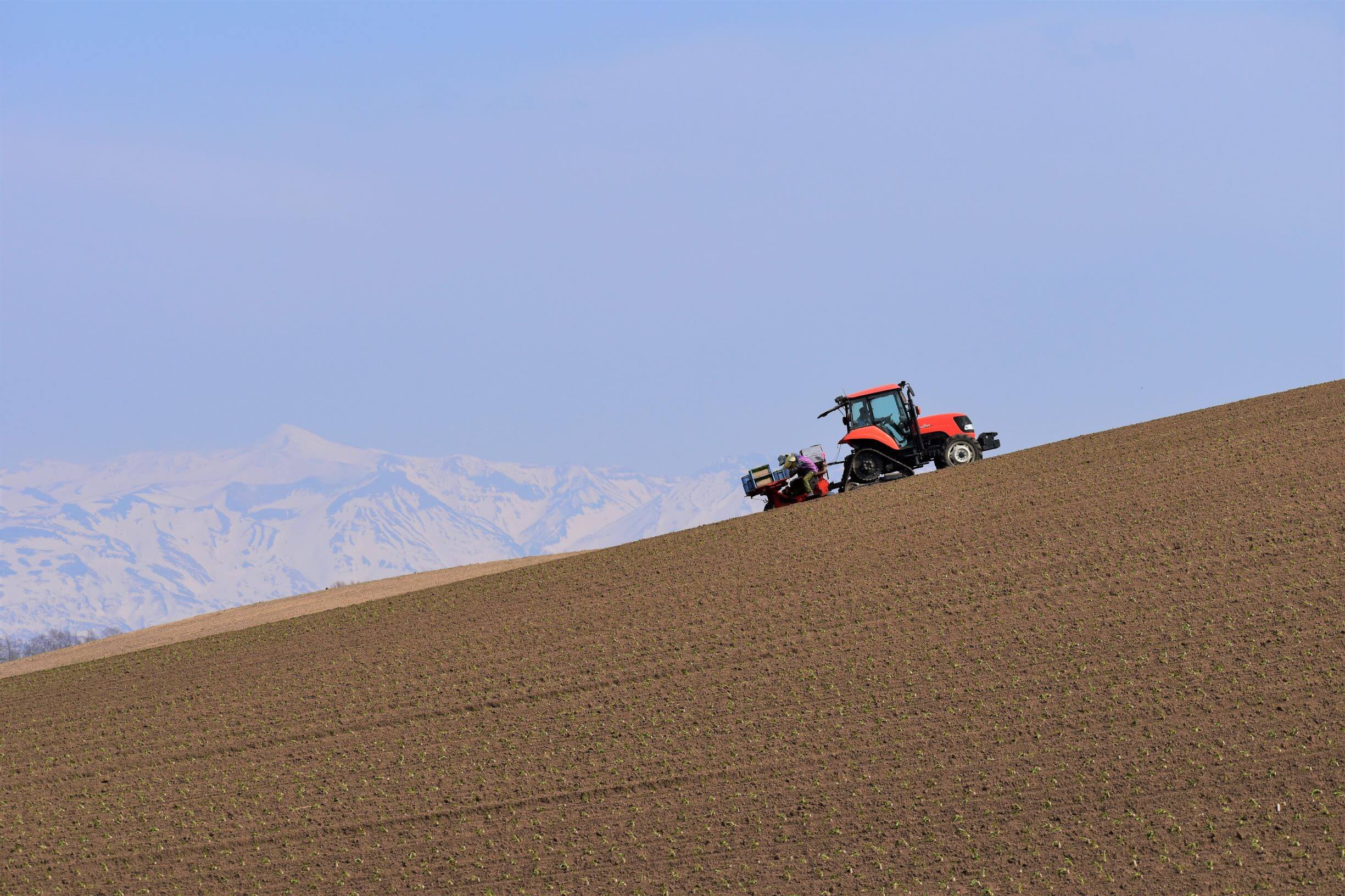 A tractor climbs a hill, evenly planting crops as it goes.

Spring is the busiest time of the year for tractors as the preparations made during this period is of the utmost importance in order to ensure a good harvest in the autumn. As such, it's not unusual to see many tractors criss-crossing a single field at once at this time of year!

For Biei residents, the sight of busy tractors roaming the hills is a sign that spring has finally arrived.

Tractors deposit some crops directly into the earth as seeds, while others are planted as seedlings raised in greenhouses during the late winter and early spring. By May-June, they begin to emerge from the soil, but they look quite different compared to when they grow up...

Can you guess what these little ones will grow up to become? 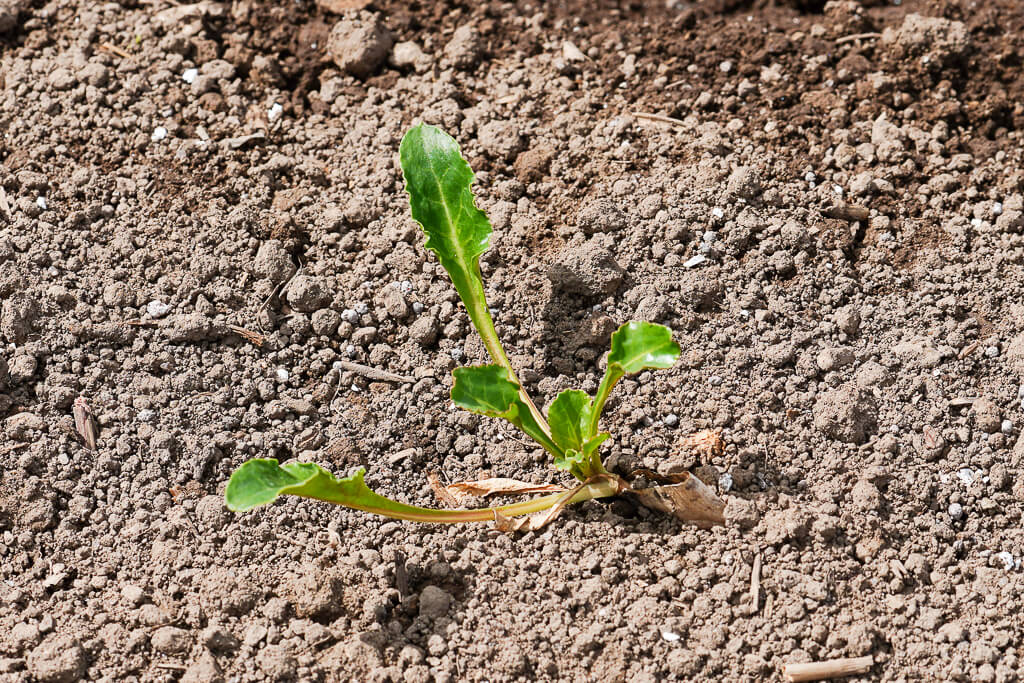 Hey, hey! Don't pull me up!
I might look like a common weed, but I promise I'm not! Look at the paper tube protecting my roots, I'm a seedling! What am I? 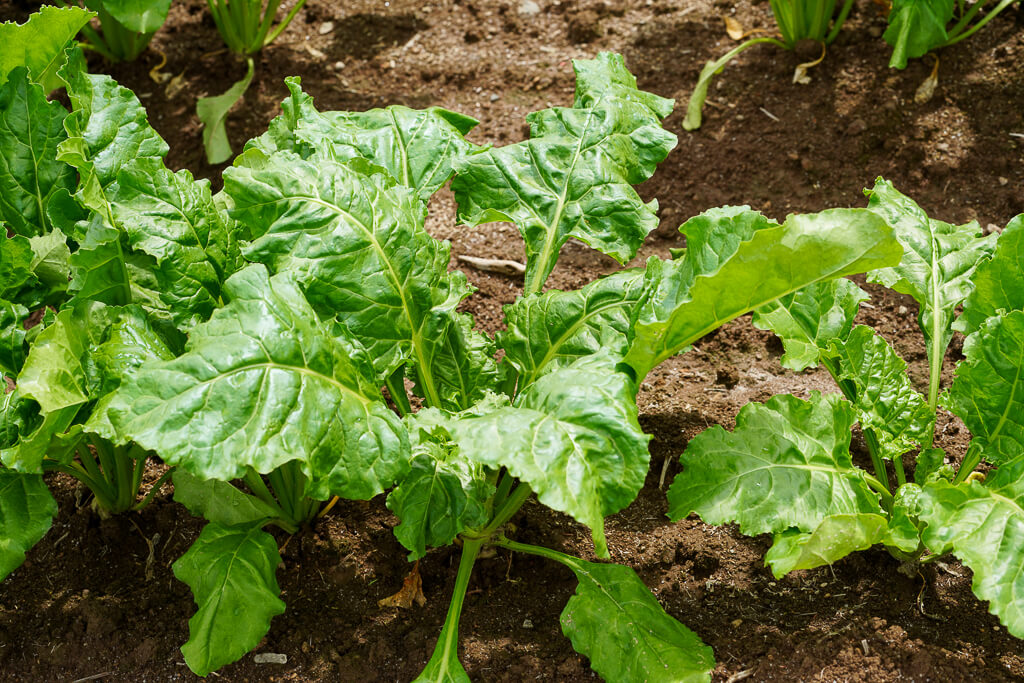 Sugar beet!
One day, I'll be a lush, leafy plant with a huge, sweet beet where this cardboard tube used to be! 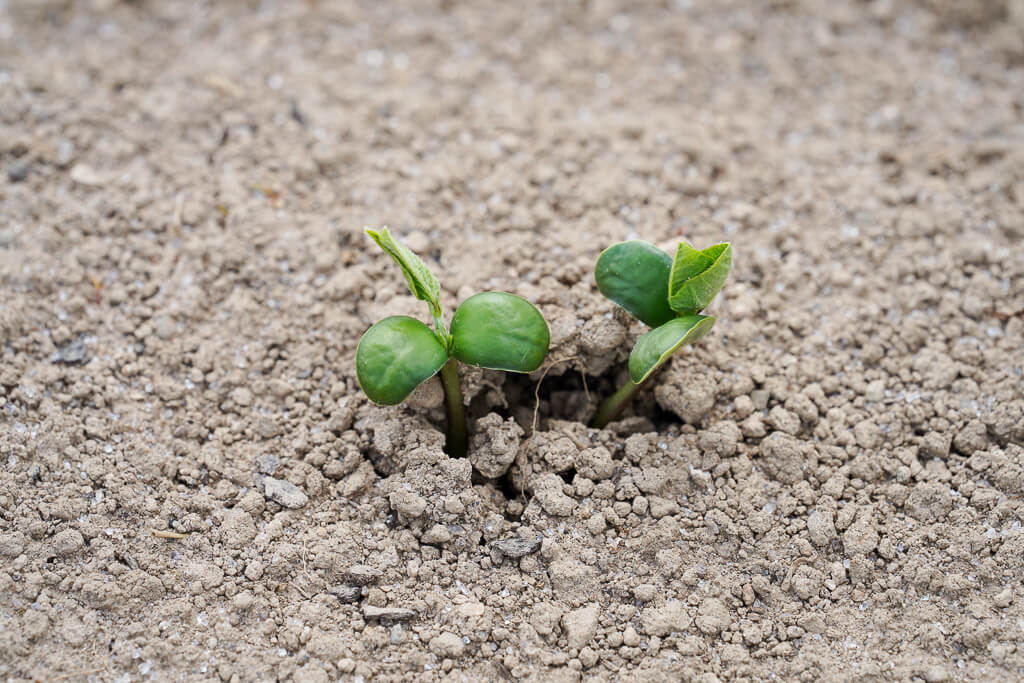 Aren't I just so cute with my symmetrical leaves? I am planted as a seed. Perhaps you too once grew me for science class in elementary school? What am I? 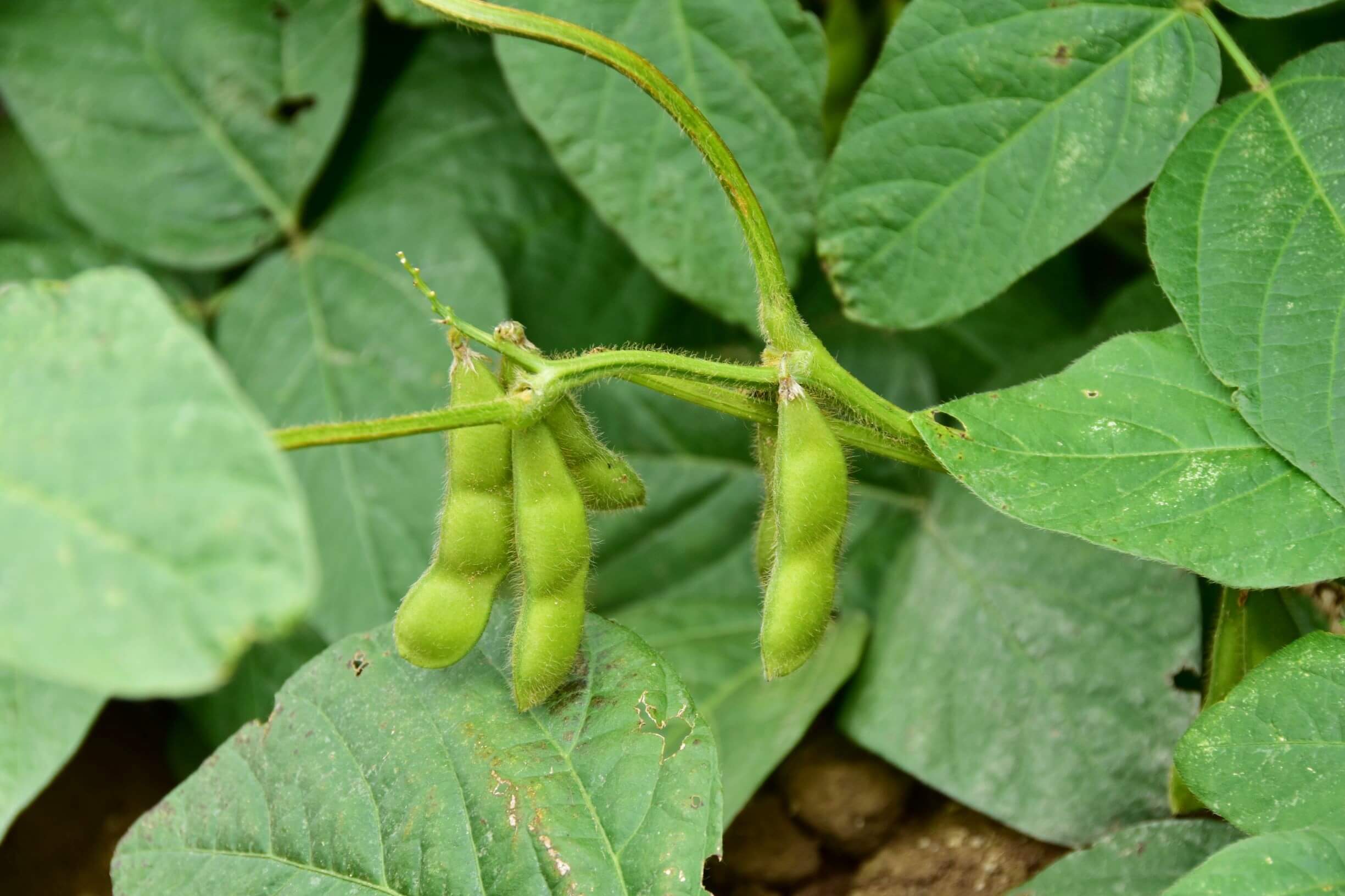 Beans!
Or, specifically, soybeans. I stay in the fields a long time, drying out before harvest. I'll stick around until October～

Did you get all of them right? If you visit Biei in late May, you'll have the chance to see all kinds of cute seedlings poking out of the soil. You can have lots of fun guessing what they may grow up to become!

Tractors, the first sign of Biei's spring and a symbol of our hardworking farmers.

Recommend
Biei's Blossoms
All About Asparagus