With so much extra space and peace and quiet, it's no surprise that there are many different species of animals to be found in Biei and Biei locals are more than happy to share their town with wildlife. Indeed, because of the town's eco-diversity, many wildlife photographers visit us (some of them several times a year) and a number of people in the town are themselves wildlife photography hobbyists.

Why not grab your camera and see if you might be able to capture some of these creatures? Here, we'll introduce you to some of Biei's most-loved animals. Of course, these are all wild animals, and there is no guarantee that you will see them during your visit. But keep your eyes peeled, and perhaps you'll be lucky!

After a Hokkaido-based photographer won the National Geographic photography prize for Travel Photographer of the Year 2016 after photographing red foxes in Biei, these creatures have suddenly become the star of the Biei wildlife scene. They are beautiful, and they know it—just look at the way they walk, swishing their long tails!

Foxes are found all over Biei's hills but the best time to see them is in the early morning or towards the evening. They have keen senses and are quite shy so they will not come out if they hear, see or smell you coming. When searching for them, keep an eye on banks or slopes in the hills as the foxes like to lie in wait at the base of these for unsuspecting mice or voles that might scurry out… right into the fox's waiting jaws!

This little fellow has won the hearts of many visitors to Biei because its expression makes it look like it has a permanent smile!

The Ezo Squirrel is a subspecies of red squirrel native to Hokkaido. They are quite large for a squirrel and Hokkaido is the only place that you will find them. The forests around the Shirogane area of Biei are home to this adorable creature and if you are quiet as you explore the hiking trails, you may very well see one. Although they do not hibernate, they are much less active in winter. The highest chance of seeing them is noon in summer and fall as they busily stockpile food in preparation for the deep snows to come.

The Hokkaido version of the Japanese Sika Deer. These hardy creatures don't care whether it's hot or cold. Whatever the weather, they will be out and about on plains towards the Tokachi mountains, searching for food to eat. Sometimes you may also see them around the hills, but as there are not as many places to hide out on the farms, they tend to stick to areas where they can take cover if they need to.

It's a wonder that they can keep their balance in the snow or uneven forest floor with those spindly legs but they seem to manage just fine!

With a lack of natural predators (the only creature that actively hunts Sika deer in Hokkaido is the Ussuri brown bear), the population of Sika deer has exploded in Hokkaido recently, which is starting to have a negative effect on eco-systems across the region. To counter this, many communities in Hokkaido now hunt the deer to keep their numbers in check which means that venison is one of Hokkaido's specialities! You can also enjoy venison in Biei, too.

Where Can I Try Venison?

At Shikisai Hill's (Shikisai-no-Oka) restaurant, you can try Biei venison for yourself! Venison is featured in all kinds of dishes here, such as curry and rice bowls. Stop by and give it a try if you're curious. 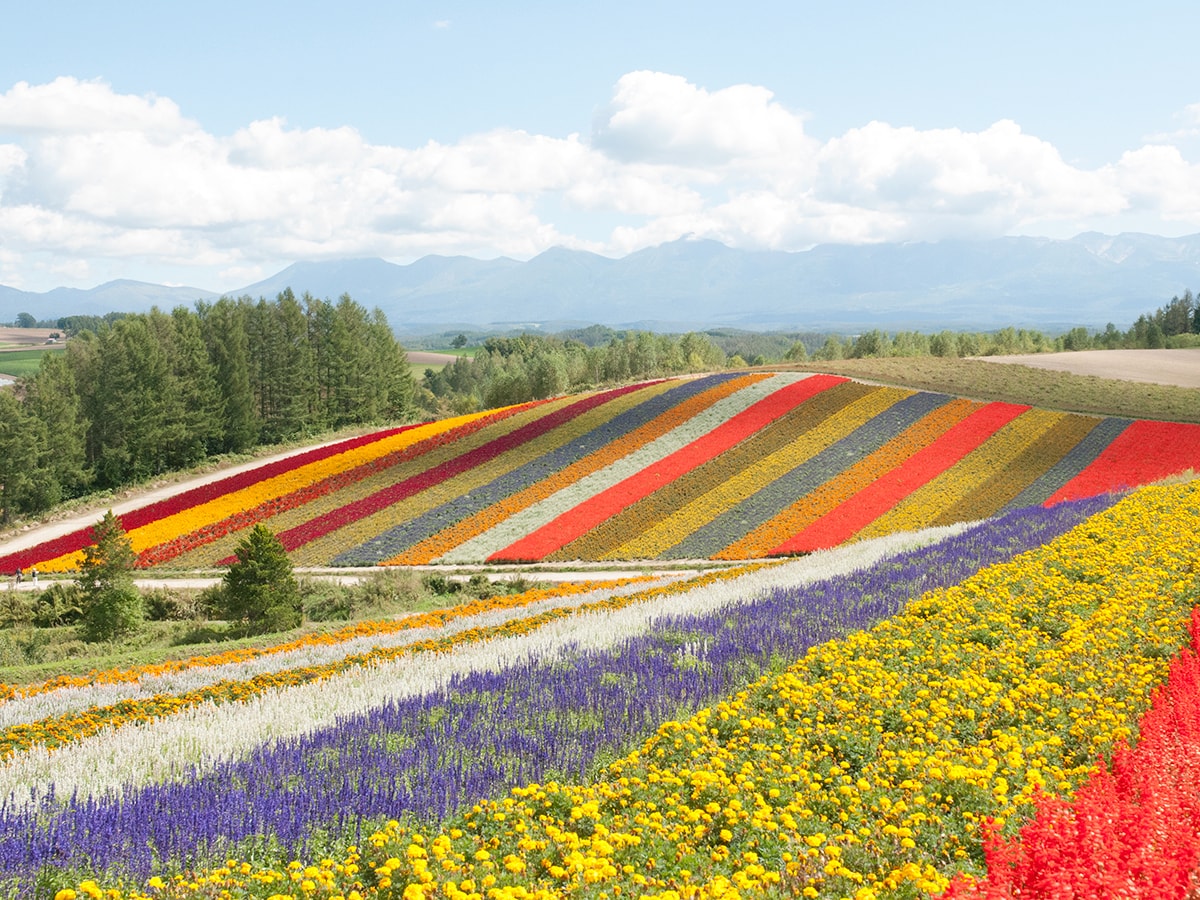 These are known as “naki-usagi” in Japanese, which means “crying rabbit”. This creature, while not endangered, is rare in Japan and can only be found in Hokkaido so it seems to be very popular with amateur wildlife photographers in the region. It lives at altitudes above 800m in the Daisetsuzan National Park which is just a short drive from Biei. They make their homes in stable piles of scree and rockfall, scurrying in and out of the cracks. Northern Pikas seem to be quite timid creatures—they will never stray too far from their den.

They spend the autumn gathering their favourite foods in preparation for the winter, stockpiling ferns, mosses, mushrooms and more.

These days it's getting harder to see them out and about but even if you don't manage to spot one, you may very well hear one. Their distinctive calls can't be missed!

Did you see something moving in the snow, just now?

It could have been a well-camouflaged Hokkaido Snow Hare. Their pure white coat in the winter makes them almost impossible to spot. They're hard to see in the summer, too, as their coats turn brown and camouflage against the earth. You can find hares hippity-hopping across much of Biei, even around the hills. However, because they are hunted by so many other creatures, they have very keen senses and will dash for cover if they see or hear you coming. You might not realise you saw one until after it's slipped away out of the corner of your eye. Watch closely for them around banks, bushes or the roots of trees in the early morning or evening for the best chance of seeing one.

If you don't manage to see one then keep an eye out for their footprints in the snow in winter. They're a very unique shape so you can't miss them! 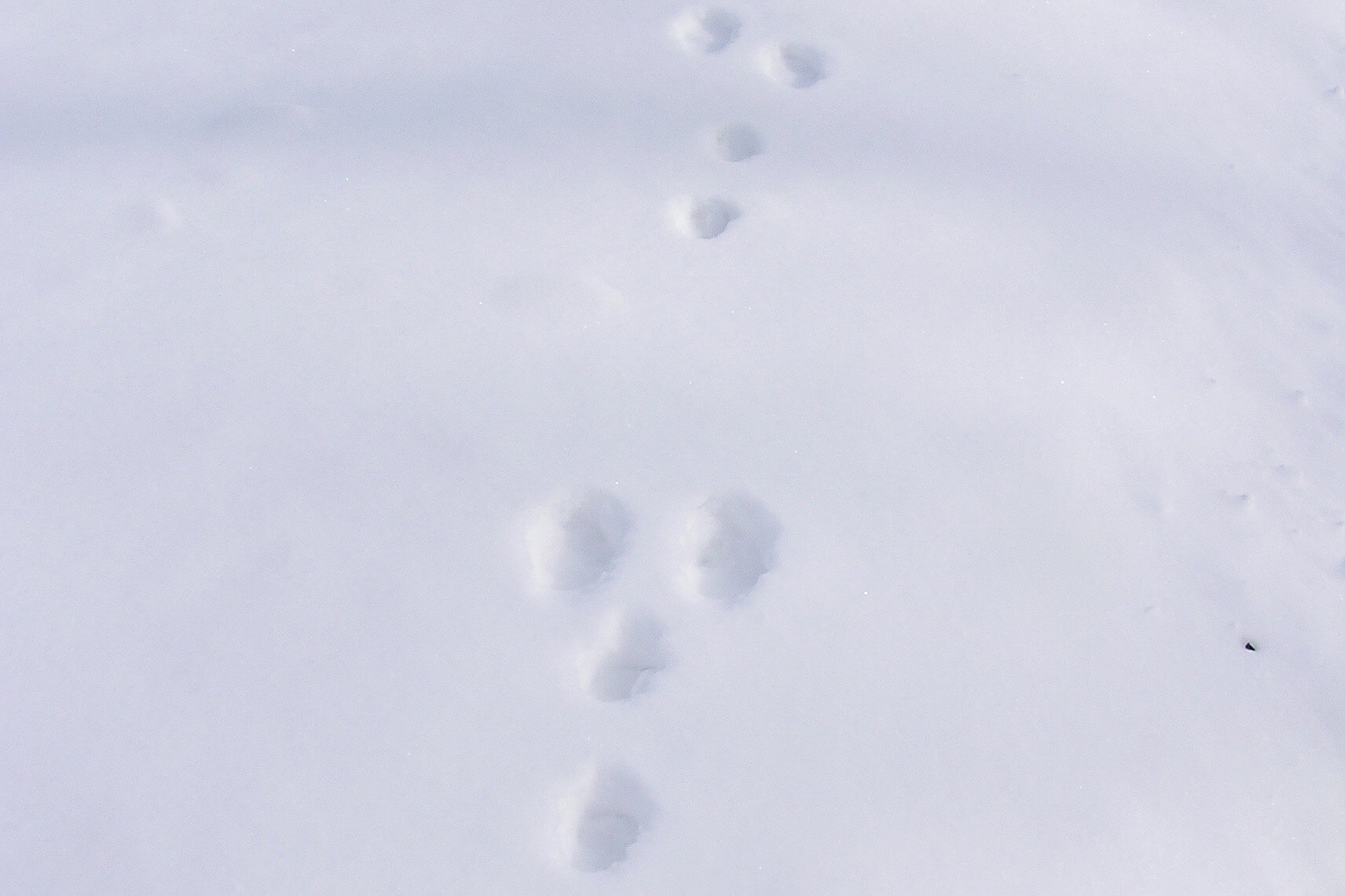 There are many other animals and birds to be found in Biei. Come and visit us and see the huge variety of wildlife in our town for yourself!