What colour is the snow?

Did you guess white?

Well, you wouldn't be mistaken in thinking so. Most people would say the same!

But in fact, here in Biei, the snow is far more than just plain white. Come with us on a winter journey through Biei's snowy wonderland, and you too will soon see that the snow here in Biei is a rainbow of different colours...

Why does the snow look white? 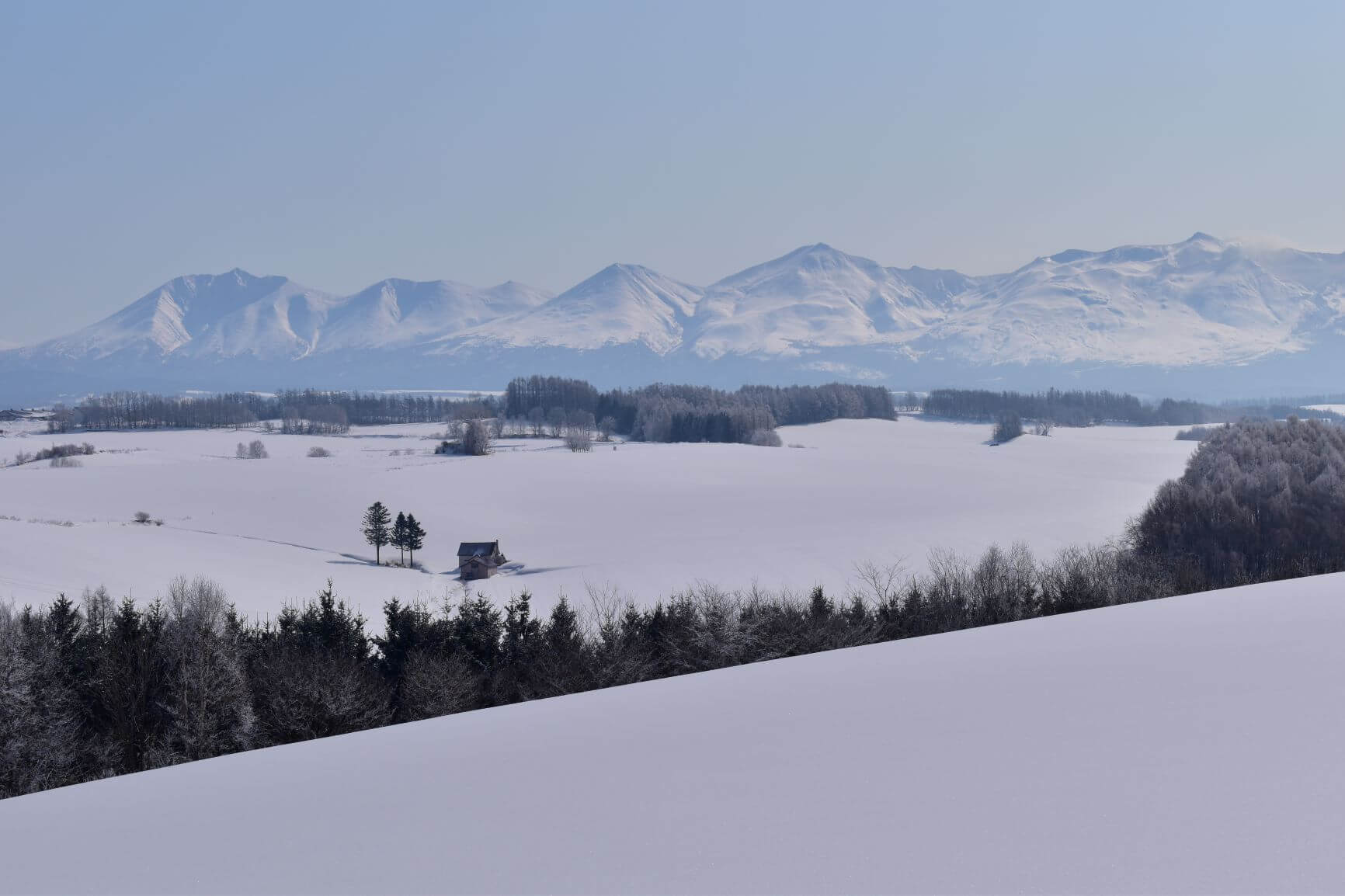 Before we begin, we should probably answer this question!

Snow is, essentially, frozen water. Water is clear, so don't you think it's kind of a mystery that snow is white and not see-through?

Well, this is because water in its frozen state as ice is not actually perfectly clear. It is made up of multiple tiny ice crystals. As we know, light is made up of all the colours on the visible spectrum mixed together, so pure light appears white. Normally, when light hits an object, interactions on a molecular level cause certain colours in the spectrum to be absorbed while others are reflected, giving the object a colour. However, because ice is made up of multiple crystals, this causes light to bounce around inside it and right back out into our eyes without any colours being absorbed, so to human eyes snow appears white! So this white world is all just a trick of the light!

But in Biei, the snow is not always white! So, what colour is the snow in Biei?

When the conditions are right, a beautiful phenomenon can be witnessed at sunset... 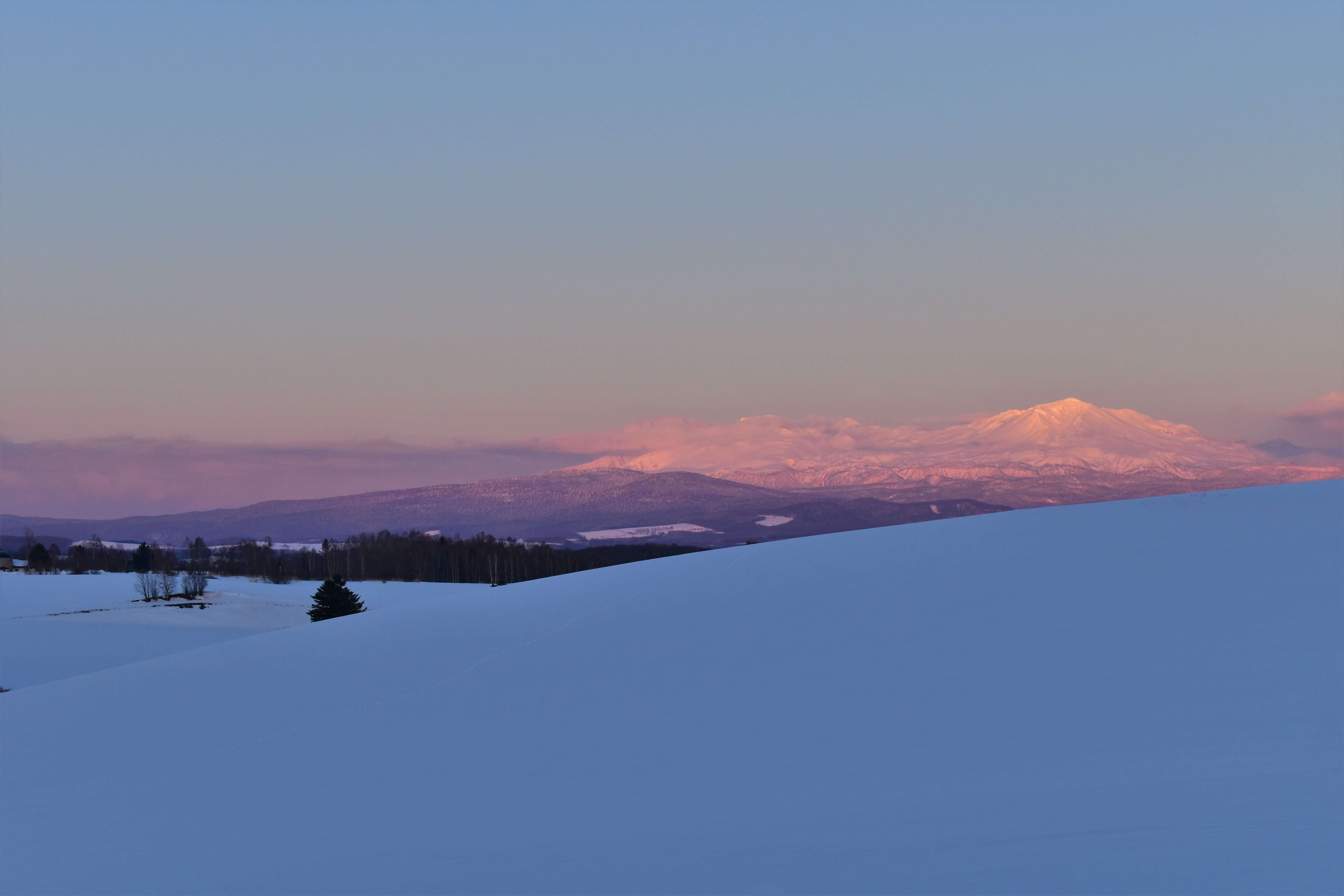 When the sun sinks below the horizon, colours with shorter wavelengths-- such as blue and green-- can no longer be reflected far enough to reach human eyes. The red wavelength, however, is the longest and so is still reflected by ice crystals, dust and other particles in the lower atmosphere. Finally, it reflects down off the snow-covered mountains and into our human eyes as a pretty, soft pink colour!

This phenomenon is sometimes known as "alpenglow" in English. 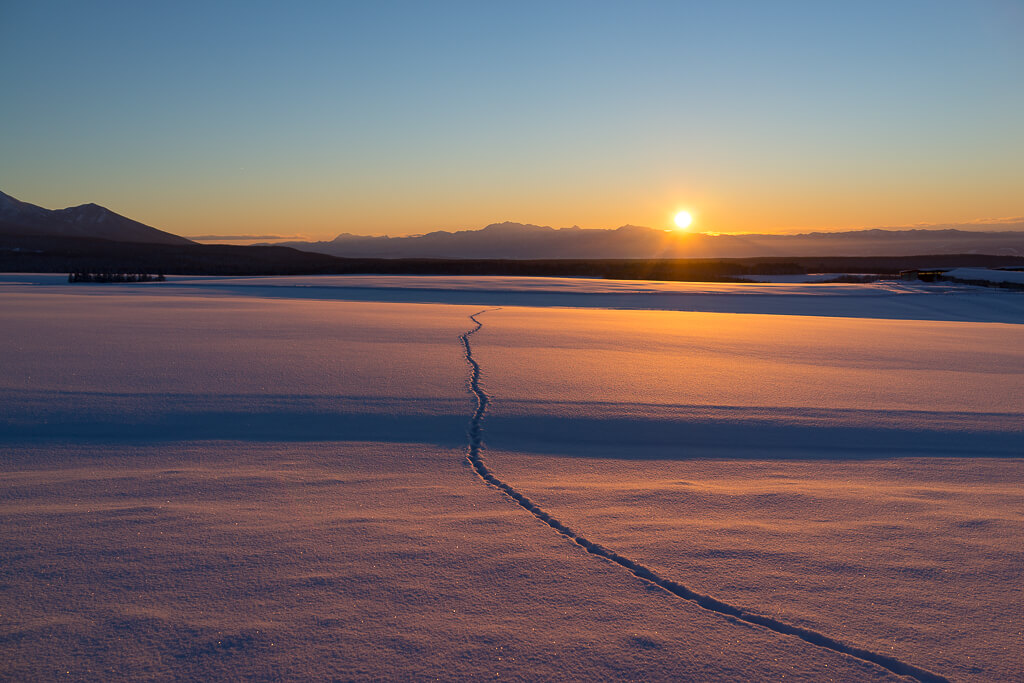 The snow goes from pure white to a magical shade of pink! 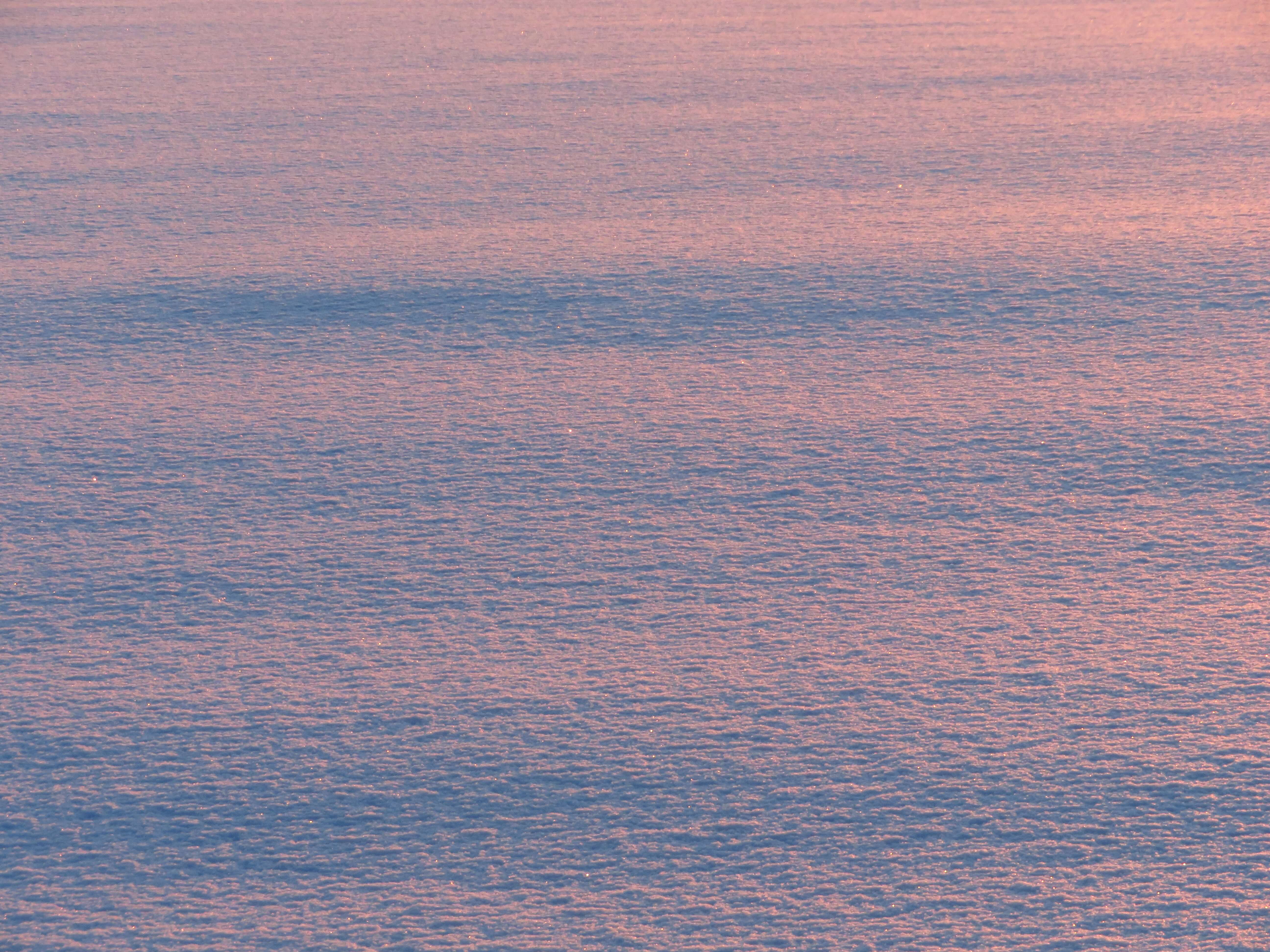 This colour doesn't look like Earth. Perhaps in this magical hour, we have been transported to a far away fantasyland?

Imagine yourself waking up in Biei in the middle of winter... Outside, it's -20oC. You open your front door and the air is so cold, it hurts to take a breath. Ouch...!

But what's this? The air is full of tiny rainbows...! 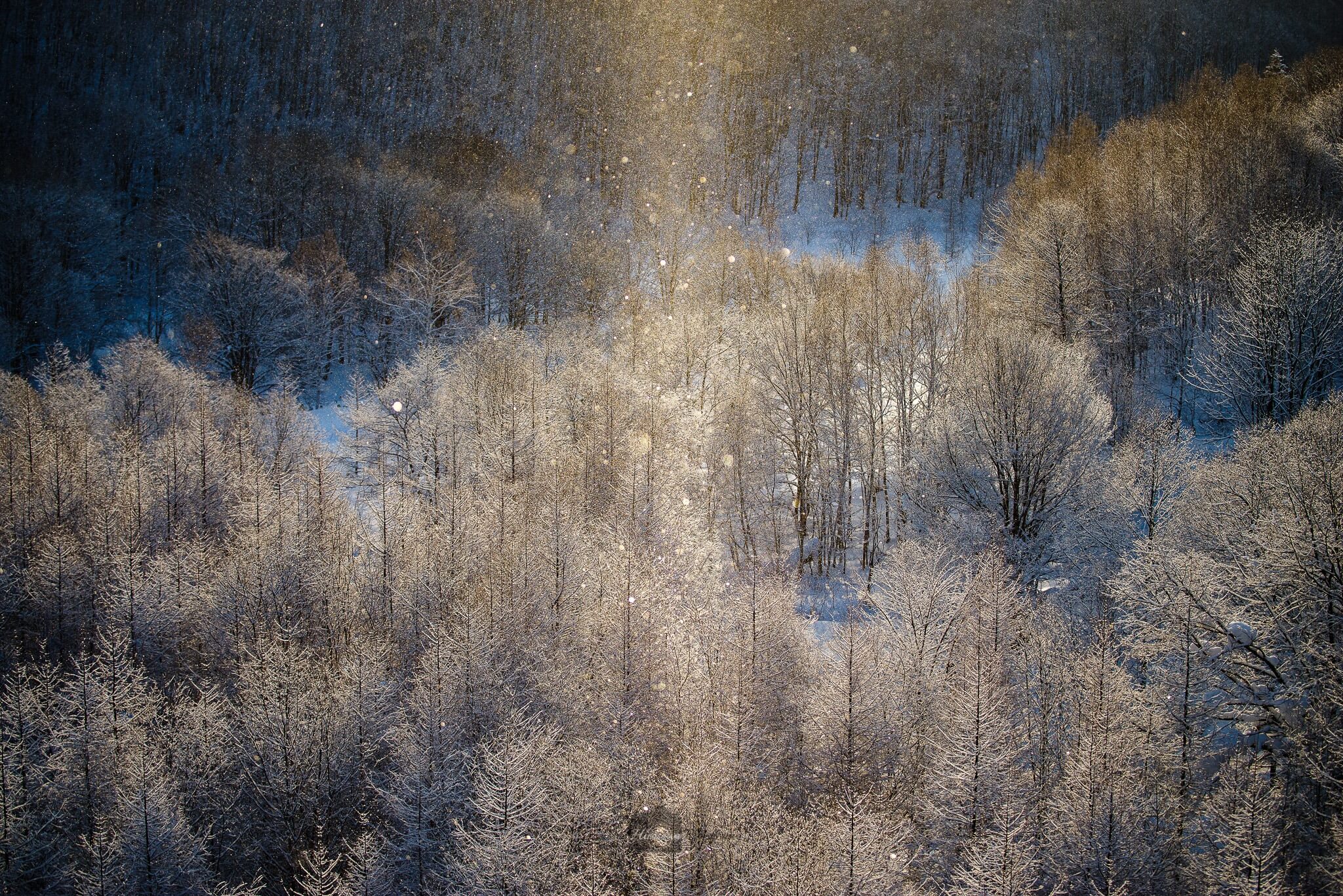 This is a phenomenon that can often be seen on Biei's coldest winter mornings... diamond dust!

These hexagonal ice crystals form in the air when the temperature is so cold, tiny water droplets and tiny water particles freeze where they are. On clear mornings with temperatures below -20oC, it is not unusual to see diamond dust floating around Biei's hills and even in Maruyama Park in the town itself! The hexagonal crystals throw light out every which way, creating a veil of sparkling rainbows in the air.

Diamond dust only occurs in regions where the air is very pure, as pollutants and dust can disrupt the formation of the tiny hexagonal ice crystals. Biei's air must be very clean for diamond dust to appear!

A related phenomenon also witnessed in Biei's winter is the Sun Pillar. As the sun rises, its light hits the same hexagonal ice crystals that create diamond dust. However, a sun pillar is formed when the hexagonal crystals are falling horizontally in the air. They reflect light down to the next horizontal crystal below, and then to the one below that and so on... until what we see is a mysterious, swirling pillar of sparkling rainbow light apparently rising out of the snow! 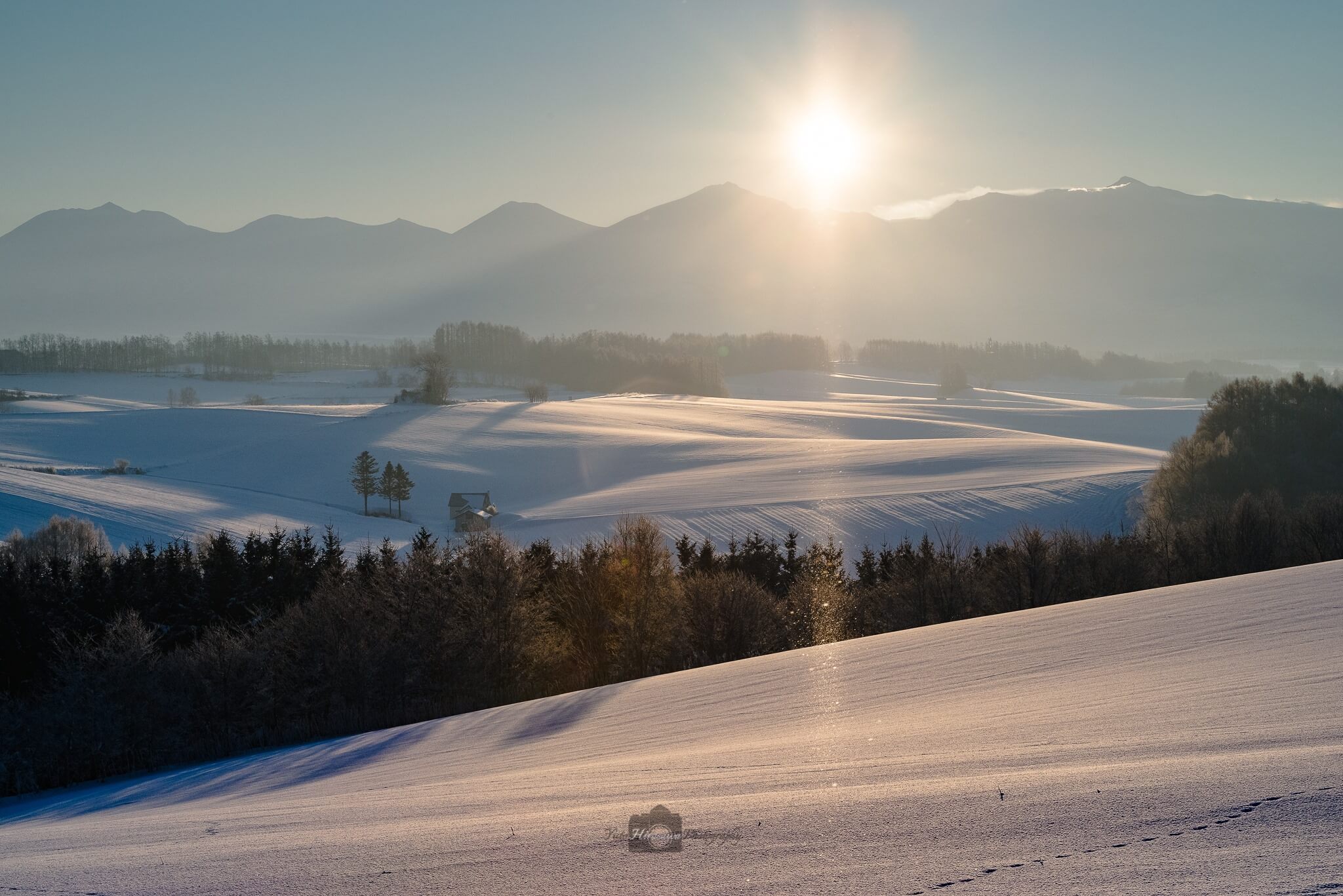 A rare sight that photographers can only dream of... a Sun Pillar visible from at Shin'ei Hill Observation Park! (Photo © Yuto Hirasawa, used with kind permission)

Both of these phenomena are extremely popular with photographers. If you're a budding photographer yourself and want to capture this magical moment, how about a winter Biei tour with an English-speaking photographer? You can learn how to capture beautiful pictures of diamond dust and sun pillars for your own portfolio! Note
Diamond Dust and Sun Pillars are natural phenomena. As such, their appearance depends on weather conditions so we cannot guarantee you will be able to see them on the day of your tour. We appreciate your understanding in this regard.

The Deepest of Blue

Well, technically, this section is not about the snow... but the snow only helps to make this particular sight look even more beautiful!

The Biei river runs through Biei town. Its unique shade of cerulean blue comes from mineral compounds mixing with the waters at Shirahige Falls in Shirogane Onsen. It is this river that feeds the Blue Pond and also gives it its striking colour! 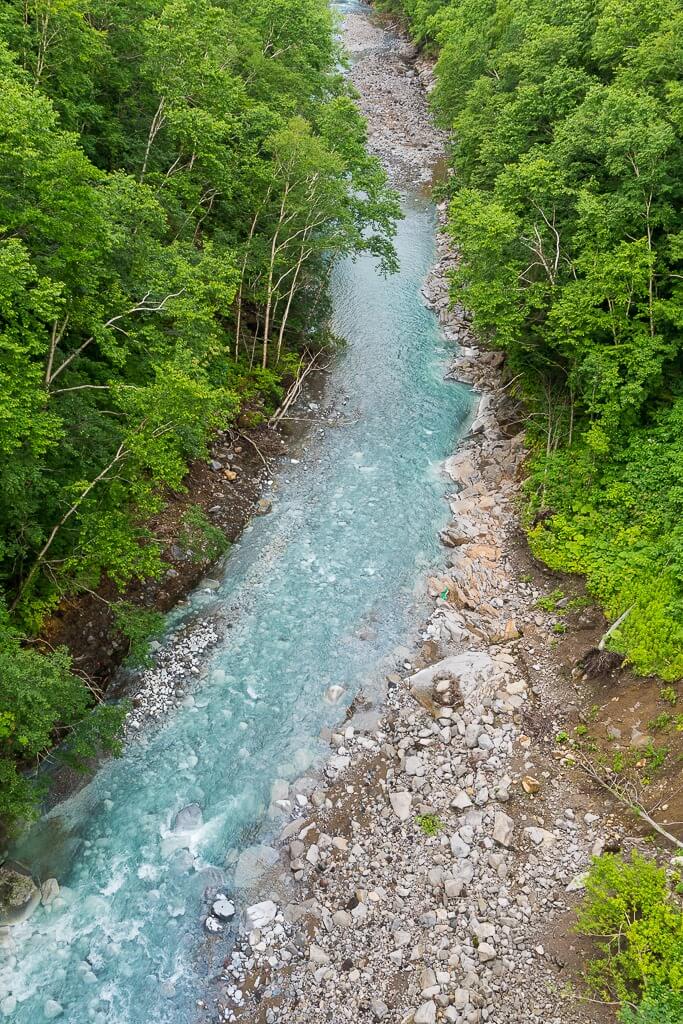 In summer, the blue colour looks slightly muted due to the bright green forest that surrounds the river. But in winter, surrounded by pure white snows, we can get a true sense for just how beautiful and blue the Biei River is...

Winter transforms the river into something even more beautiful!

This magical colour is of course visible all year round, but it's only in winter, against a backdrop of pure white, that it pops so brightly.

Normally, the best place to see the Blue River is from the same bridge that offers you a view of Shirahige Falls. But it's so far below... Fortunately for you, Be my BIEI is proud to share a special snowshoe tour in Shirogane Onsen that will allow you to get right alongside the Blue River (and even enjoy a special Blue River-themed warm drink along the way!)

Snowshoeing in a Shirogane Forest

A Canvas of Colour

Surely you have heard by now of Biei's most famous attraction, the Blue Pond?

As you can well imagine, the pond loses its magical blue colour in winter when the snow piles up on its frozen surface...

Hmmm... This is a little uninspiring...

However, this pure white sheet becomes a canvas for what are perhaps Biei's most splendid snow colours... 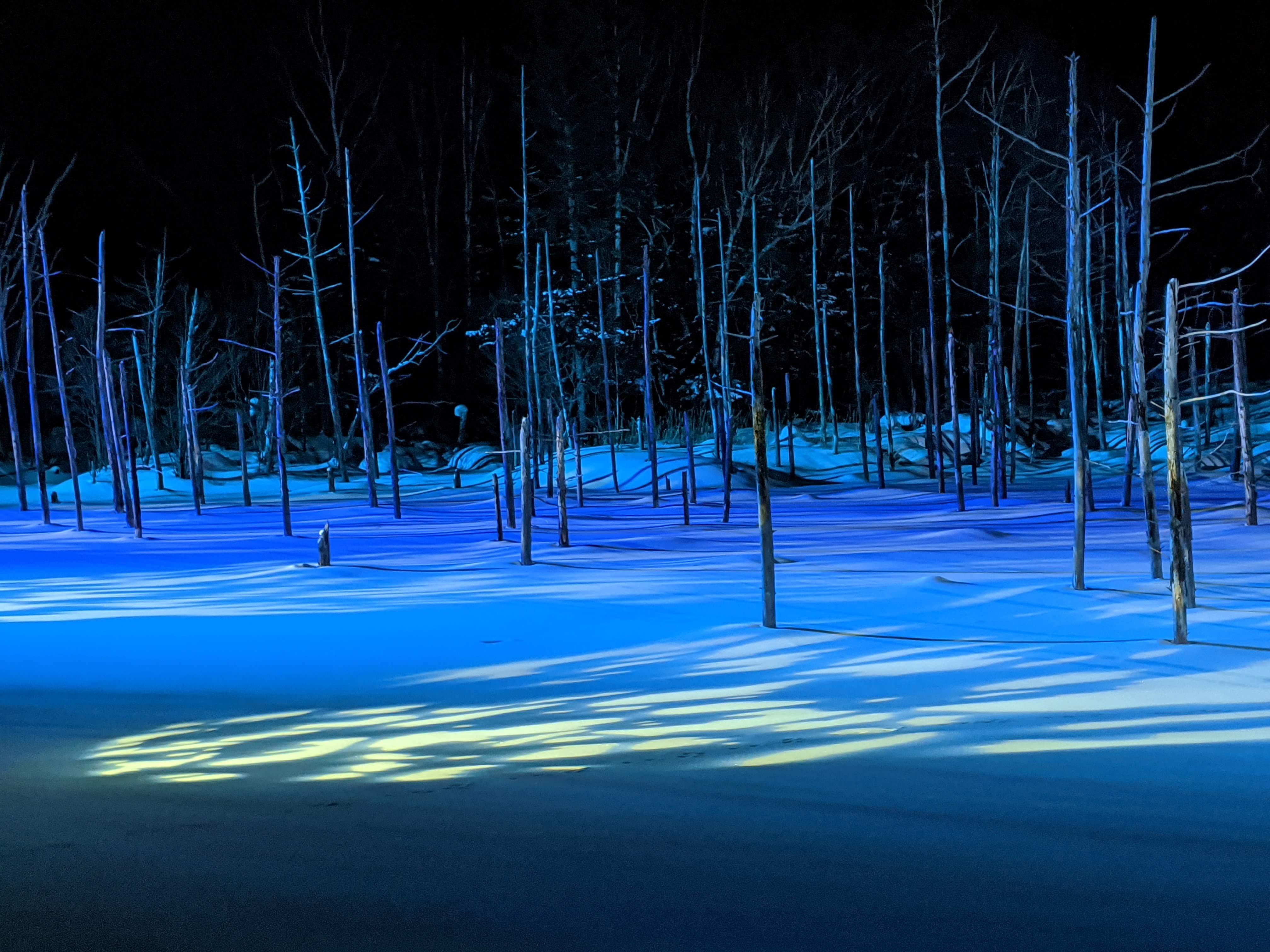 As darkness falls, the white canvas is illuminated with a kaleidoscope of colours and patterns! 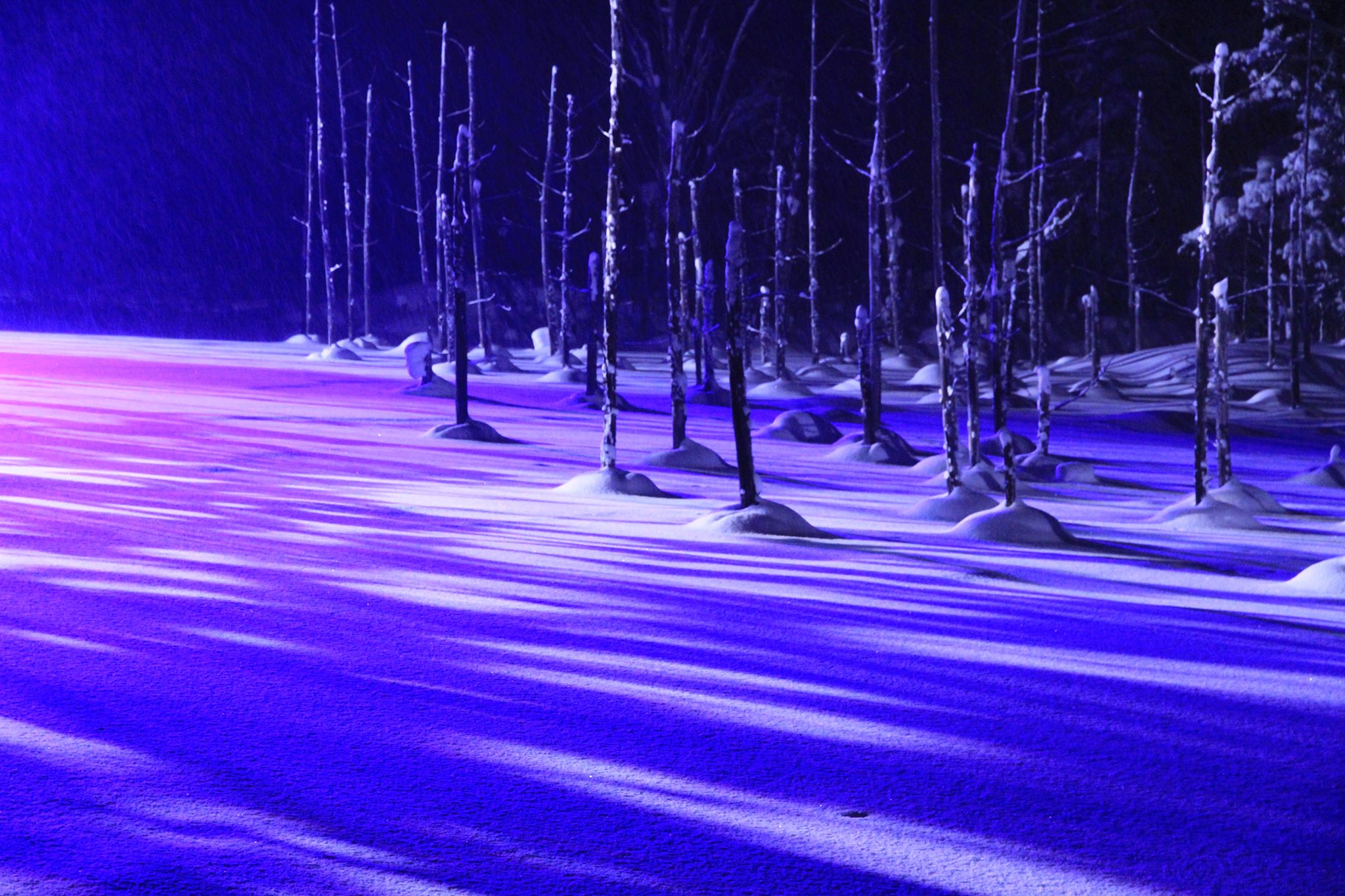 Is this really the same Blue Pond?! It looks totally different! Just like Biei's other seasons, winter is full of colour...
Come and join us in this colourful winter wonderland soon!